If I look back now, it must be more than 20 years since I got fascinated with GNU/Linux ecosystem and started using it.

Back then, it was more curiosity of a young teenager and the excitement to learn something. There’s one thing that I have always admired/respected about Free Software’s values, is: Access for everyone to learn. This is something I never forget and still try to do my bit.

It was perfect timing and I was lucky to be part of it. Free Software was (and still is) a great platform to learn upon, if you have the willingness and desire for it.

Over the years, a lot lot lot has changed, evolved and improved. From the days of writing down the XF86Config configuration file to get the X server running, to a new world where now everything is almost dynamic, is a great milestone that we have achieved.

All through these years, I always used GNU/Linux platform as my primary computing platform. The CLI, Shell and Tools, have all been a great source of learning. Most of the stuff was (and to an extent, still is) standardized and focus was usually on a single project.

There was less competition on that front, rather there was more collaboration. For example, standard tools like: sed, awk, grep etc were single tools. Like you didn’t have 2 variants of it. So, enhancements to these tools was timely and consistent and learning these tools was an incremental task.

On the other hand, on the Desktop side of things, it started and stood for a very long time, to do things their own ways. But eventually, quite a lot of those things have standardized, thankfully.

For the larger part of my desktop usage, I have mostly been a KDE user. I have used other environments like IceWM, Enlightenment briefly but always felt the need to fallback to KDE, as it provided a full and uniform solution. For quite some time, I was more of a user preferring to only use the K* tools, as in if it wasn’t written with kdelibs, I’d try to avoid it. But, In the last 5 years, I took at detour and tried to unlearn and re-learn the other major desktop environment, GNOME.

GNOME is an equally beautiful and elegant desktop environment with a minimalistic user interface (but which at many times ends up plaguing its application’s feature set too, making it “minimalistic feature set applications”). I realized that quite a lot of time and money is invested into the GNOME project, especially by the leading Linux Distribution Vendors.

But the fact is that GNU/Linux is still not a major player on the Desktop market. Some believe that the Desktop Market itself has faded and been replaced by the Mobile market. I think Desktop Computing still has a critical place in the near foreseeable future and the Mobile Platform is more of an extension shell to it. For example, for quickies, the Mobile platform is perfect. But for a substantial amount of work to be done, we still fallback to using our workstations. Mobile platform is good for a quick chat or email, but if you need to write a review report or a blog post or prepare a presentation or update an excel sheet, you’d still prefer to use your workstation.

So…. After using GNOME platform for a couple of years, I realized that there’s a lot of work and thought put into this platform too, just like the KDE platform. BUT To really be able to dream about the “Year of the dominance of the GNU/Linux desktop platform”, all these projects need to work together and synergise their efforts.

Kmail used to be an awesome email client. Evoltuion today is an awesome email client. Thunderbird was an awesome email client, which from what I last remember, Mozilla had lack of funds to continue maintaining it. And then there’s the never ending stream of new/old projects that come and go. Thankfully, email is pretty standardized in its data format. Otherwise, it would be a nightmare to switch between these client. But still, GNU/Linux platforms have the potential to provide a strong and viable offering if they could synergise their work together. Today, a lot of resource is just wasted and nobody wins. Definitely not the GNU/Linux platform. Who wins are: GMail, Hotmail etc.

If you even look at the browser side of things, Google realized the potential of the Web platform for its business. So they do have a Web client for GNU/Linux. But you’ll never see an equivalent for Email/PIM. Not because it is obsolete. But more because it would hurt their business instead.

My biggest gripe is data accessiblity. Thankfully, for most of the stuff that we rely upon (email, documents etc), things are standardized. But there still are annoyances. For example, when KDE 4.x debacle occured, kwallet could not export its password database to the newer one. When I moved to GNOME, I had another very very very hard time extracting passwords from kwallet and feeding them to SeaHorse. Then, when recently, I switched back to KDE, I had to similarly struggle exporting back my data from SeaHorse (no, not back to KWallet). Over the years, I realized that critical data should be kept in its simplest format. And let the front-ends do all the bling they want to. I realized this more with Emails. Maildir is a good clean format to store my email in, irrespective of how I access my email. Whether it is dovecot, Evolution, Akonadi, Kmail etc, I still have my bare data intact.

I had burnt myself on the password front quite a bit, so on this migration back to KDE, I wanted an email like solution. So there’s pass, a password store, which fits the bill just like the Email use case. It would make a lot more sense for all Desktop Password Managers to instead just be a frontend interface to pass and let it keep the crucial data in bare minimal format, and accessbile at all times, irrespective of the overhauling that the Desktop projects tend to do every couple of years or so.

Data is critical. Without retaining its compatibility (both backwards and forward), no battle can you win.

I honestly feel the Linux Desktop Architects from the different projects should sit together and agree on a set of interfaces/tools (yes yes there is fd.o) and stick to it. Too much time and energy is wasted otherwise.

This is something I have always desired and I was quite impressed (and delighted) to see some progress on the KDE desktop in the UI department. On GNOME, I developed a liking for the Evolution email client. Infact, it is my client currently, for Email, NNTP and other PIM. And I still get to use it nicely in a KDE environment. Thank you. 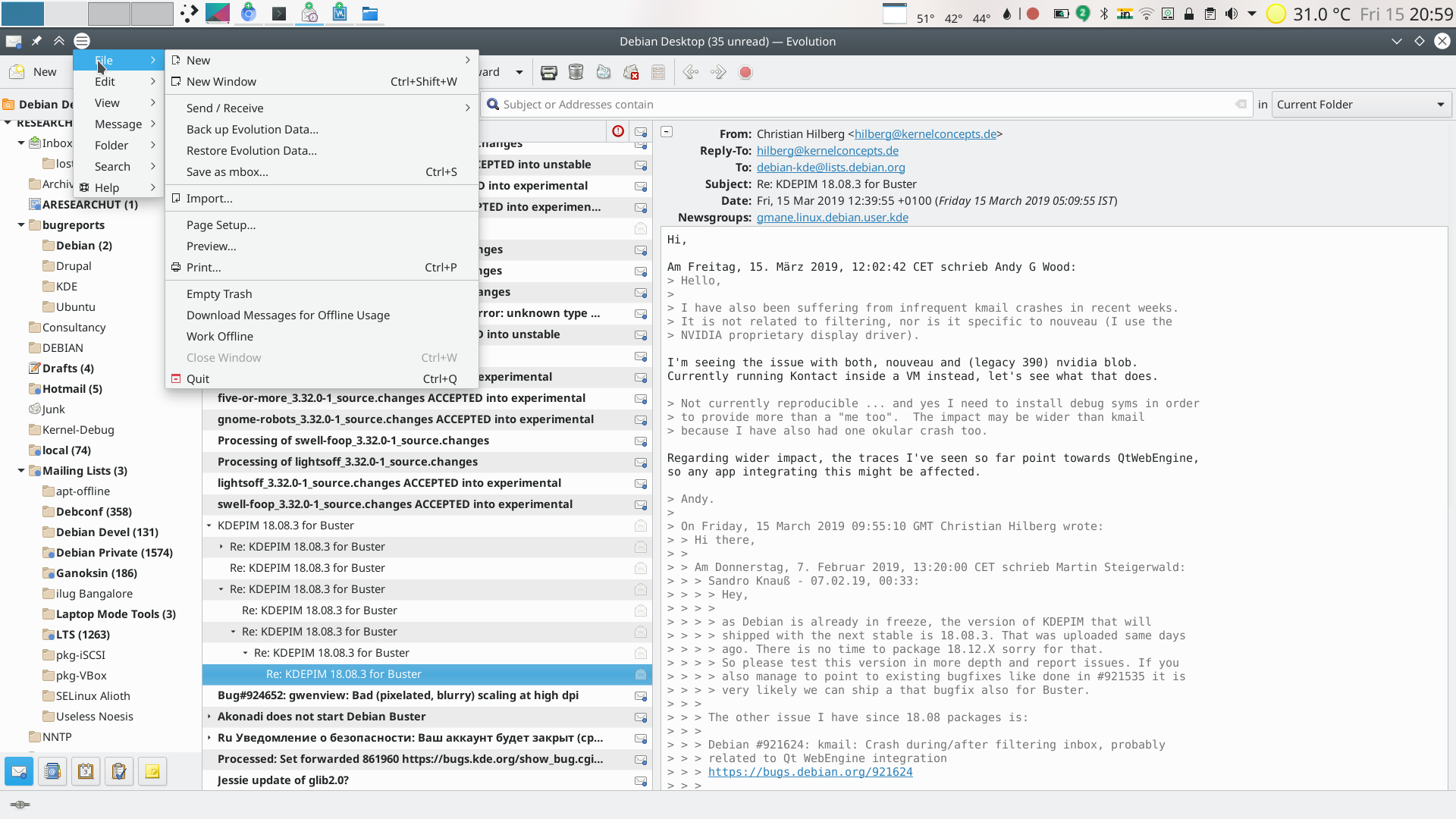