apport just cleared the new queue and is now available in experimental. For those who do not know what apport is:

Debugging program crashes without any automated tools has been pretty time consuming and hard for both developers and users. Many program crashes remain unreported or unfixed because:

Apport is a system which

At this moment, it is quite broken. The crashes are not intercepted by update- notifier on my box. With it now in experimental, my intent is to slowly integrate it well with all dependent tools for Debian. It won’t be ready for the Wheezy release, but hopefully for the one after that.

On the Ubuntu side, Canonical hosts a retracing service that takes user reported core dumps and generates a usable backtrace. For Debian, my plan is to have a chroot kind interface, where in the user could opt-in to download all debug packages to generate a valid backtrace. This could go as the debian backend for apport in the future. On the bug reporting side, afaik, we do not have a web interface to lodge bugs. To report bugs (minus the core dumps), we will want a backend to submit it over email. The current apport report gathering tool is pretty good (if compared to other tools like reportbug), so here the low hanging fruit would be to just take the report and feed in email to our BTS server. 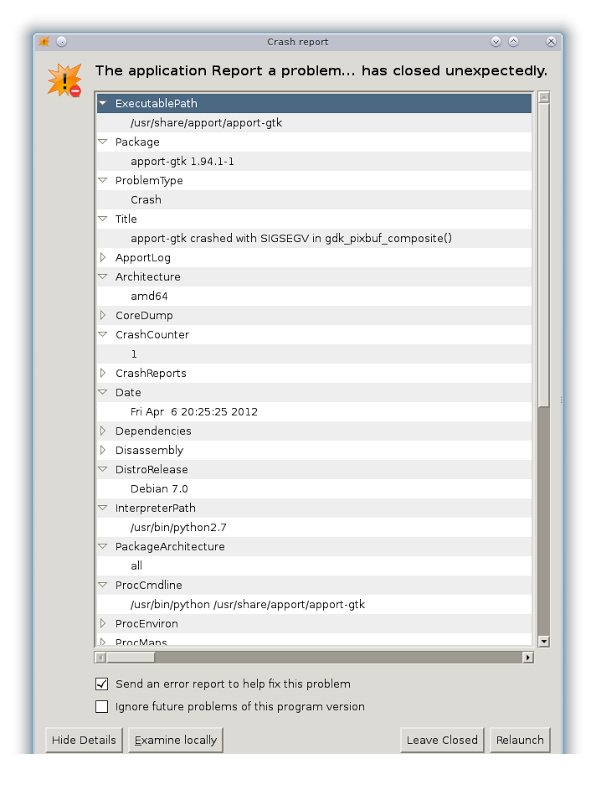