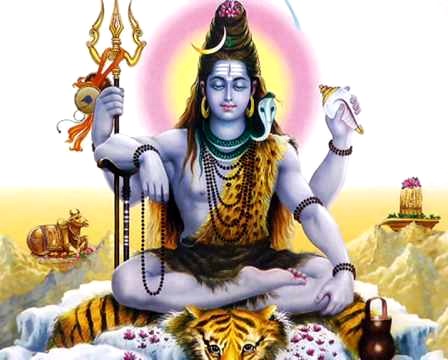 A pious and faithful Brahmin called Yajnadutta lived in Kampilya, a long time ago. That Brahmin was blessed with a promising son whom the happy father had named Gunanidhi, literally meaning ‘repository of fine attributes’. After the boy’s sacred thread ceremony (Upanayana) he was sent to a guru to learn letters and gain wisdom.The boy progressed into youth but unfortunately fell in a bad company and picked up all bad and vice habits. Yajnadutta had been too busy to notice the degeneration of his son. The mother was blind in affection for her son to see anything going wrong.

Spoil rotten, Gunanidhi took gambling and womanising. All the money he laid his hands on went into those vices. Then, needing more money he began to thieve and sell the stolen goods. Once he gambled away all he had made. Meanwhile, his father, while going to river to take his bath entrusted his precious gold ring to his wife. The wife placed it in a niche of a wall. The son, Gunanidhi saw her doing that and stole the ring. He sold it to a man and gambled away the proceeds. Incidentally, Yajnadutta ran into the person who was wearing the ring his wife had lost. Upon enquiry the man revealed that he had bought the ring from a young man named Gunanidhi.

Yajnadutta now realised that what lately he had been hearing bad things about his son were true. The son learnt that his father had come to know of his misdeeds. Gunanidhi fled to avoid being confronted by his anguished father.

Gunanidhi went hungry for a couple of days. He flopped under a tree famished and exhausted. Suddenly flavours of richly cooked food wafted into his nostrils. A faithful was carrying some food offering to the nearby Lord Shiva temple. He waited at some distance for an opportunity to steal the offering. He saw the worship and prayers being sung. When the devotees fell asleep he sneaked into the sanctum where in front of Lord Shiva idol offerings were placed. The wick of the lamp had slipped into the oil and flame was about to flicker off. Gunanidhi quickly tore a strip off his kurta, dipped in oil, lit it and put it into the lamp to serve as substitute wick. Then he tried to hurry out with the bundle of stolen food offering. But he happened to stumble against a sleeping devotee who screamed in fright. The devotees woke up and grabbed the thief. Gunanidhi got beaten up and a blow of a thick stick smashed his skull. He died instantly.

The agents (dootas) of death arrived to despatch the sinful soul of Gunanidhi to burning hell. But ganas (elite guards of Lord Shiva) intervened saying that Gunanidhi had earned a place in the divine domain of Lord Shiva by participating in Lord Shiva worship, lighting the lamp after fasting for two days before his death, although done unwittingly yet the reward stood granted by the grace of lord. he had been salvaged.

Rebirth of Gunanidhi as Kubera

As the son of the king of Utakala, Gunanidhi took rebirth by a new name Damana. Damana lived a life of piety, devotion and nobility. In his next birth he was born as the son of the grandson of Brahma. He had brought forward goodness of his previous life and by the grace of Lord Maheshwara, remembered all about his past lives.

An ardent devotee of Lord Shiva he remained all his life. On the bank of Ganga he planted a holy lingam and penance on empty stomach. His shrivelled skin draped his skeletal emaciated body. Propitiated with his intense devotion Lord Shiva appeared to him along with his divine consort. The blessed their faithful with the boon of a divine body and renamed him _' Kubera'. _By the grace of divine couple, Kubera later gained the rule of Alkapuri. Lord Shiva went to live near Alkapuri when Kubera wished for his proximity on a boon.

In his new domain Lord Shiva rattled his ' hand tambour' (Dumroo). It’s fierce beat echoed through the cosmos. All celestial beings rushed to Lord Shiva to feat their eyes on him. So did sages, holy men, faithful’s and hosts of his own ganas led by their chiefs with folded hands praying and making their obeisance. the celestial builder instantly created palaces to host them all. Lord Shiva duly settled in his adobe. Later, all the guests returned to their own adobes. Thus, Lord Shiva granted his proximity to his favoured faithful Kubera who became the lord of the divine treasury.