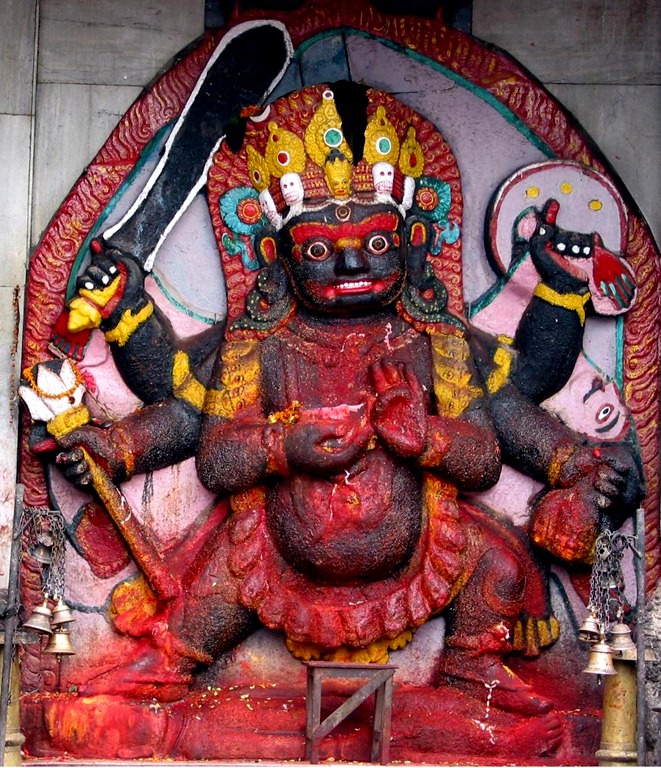 Bhairava is the fierce manifestation of Lord Shiva associated with total destruction.

He is ornamented with a range of twisted serpents (as earrings), bracelets, anklets, and sacred thread (Yajnopavita). He wears a tiger skin and a ritual apron composed of human bones.

Once while travelling around the universe, Lord Brahma reached the abode of Lord Vishnu. He saw Lord Vishnu resting on Adi-Anant-Shesha and being attended by Garuda and other attendants.

As Lord Brahma entered, Lord Vishnu did not get up to receive him. This act of Lord Vishnu got him angry. Very soon, verbal dual erupted between them to determine who is superior. It became so severe that a battle was fought between them, which continued for very long time.

All the deities became very worried when they saw no sign of battle coming to an end. They decided to go to Lord Shiva, to seek his help.

When Lord Shiva reached there, he manifested himself in the form of ‘Analstamba’ (Pillar of fire) between them. Lord Brahma and Lord Vishnu were very surprised to see the pillar of fire, which reached the sky and penetrated down the Earth.

Lord Vishnu transformed himself into a boar and went to the ‘Patal’ (Underworld) to find the base of that ‘Pillar of fire’. But he was unsuccessful in his attempt and came back. Similarly Lord Brahma transformed himself into a swan and flew up in the sky to find its limit. While going through the aerial route he met a withered ‘Ketaki’ flower, who told Lord Brahma that he had been present there since the beginning of the creation, but was unable to know about the origin of that ‘Pillar of fire’. Lord Brahma then sought his help to give a false witness before Lord Vishnu, that he (Lord Brahma) had been successful in seeing the limit of that pillar of fire. Then, Lord Brahma told Lord Vishnu that he had seen the limit of that Pillar of fire, Ketaki flower gave a witness. Lord Vishnu accepted the superiority of Lord Brahma.

Lord Shiva became very angry with Lord Brahma. Overflowing with anger, Lord Shiva opened his third eye and from it manifested ‘Bhairava’. Addressing him as Kala-Bhairava (Lord of Time-Death) as he shone like the God of Death, Lord Shiva said- “You are called Bhairava because you are of terrifying features and are capable of supporting the universe. You are called Kala-Bhairava, for even Time-Death is terrified of you.” Lord Shiva ordered him to punish Lord Brahma, promising him in return eternal suzerainty over his city of Kashi (Varanasi). In a short period of time, Bhairava ripped off Lord Brahma’s guilty head with the nail of his left thumb. Seeing this, the terrified Lord Vishnu eulogized Lord Shiva and devotedly recited his sacred hymns, followed in this by the repentant Lord Brahma. [![Shiva-comic- virgin_thumb1](/images/shiva-comic- virgin_thumb1.jpg)](https://vibhormahajan.files.wordpress.com/2012/06/shiva- comic-virgin_thumb1.jpg)

The severed head immediately stuck to Bhairava’s hand, where it remained in the form of the skull, destined to serve as his insatiable begging-bowl. Enjoining him to honour Lord Vishnu and Lord Brahma, Lord Shiva then directed Bhairava to roam the world in this beggarly condition to atone for the sin of Brahmahatya (Killing of a Brahman). 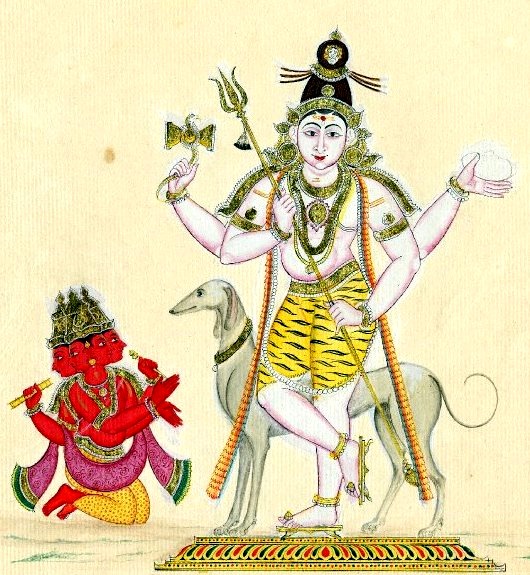 Lord Shiva said - “Show to the world the rite of expiation for removing the sin of Brahmahatya. Beg for alms by resorting to the penitential rite of the skull (kapalavrata).” Creating a maiden renowned as Brahmahatya, Lord Shiva instructed her to relentlessly follow Bhairava everywhere until he reached the holy city of Kashi to which she would have no access.

Observing the Kapalika rite with skull in hand and pursued by the terrible Brahmahatya, Bhairava sported freely, laughing, singing and dancing with his goblin horde (pramathas). As he passed through the Daru forest, the erotic ascetic arrived at Lord Vishnu’s door to seek redemption only to find his entry barred by the guard, Vishvaksena. Spearing the latter and heaving the corpse of this Brahman on his shoulder, he pressed before Lord Vishnu with outstretched begging-bowl. Lord Vishnu split his own forehead-vein but the out-flowing blood as a suitable offering, but could not fill the skull though it flowed for eons. When Lord Vishnu then tried to dissuade Brahmahatya from tormenting Bhairava, the criminal observed that “Beggars are not intoxicated by the alms they receive as by drinking the wine of worldly honour.” Before leaving joyously to beg elsewhere, Bhairava reciprocated by recognizing Lord Vishnu as his foremost disciple and acknowledged the latter’s status as"Grantor of boons to all the Gods". On arriving at Kashi, the skull fell on the ground, freeing Bhairava from his sin and Brahmahatya sank into the nether-world.