After manifesting from Lingam of luminosity and enlightening Lord Brahma and Lord Vishnu, Lord Shiva withdrew into his formless infinity. Lord Brahma sought guidance from Lord Vishnu about creation. After briefing Lord Brahma, Lord Vishnu went to live in the outer region of space making it his own domain.

For the purpose of creation, Lord Brahma invoked Lord Shiva and Lord Vishnu. Then, he threw up a handful of water which transformed into a great egg of cosmic dimension that was a manifestation of 24 elements. But it was inert. He prayed to beget life and consciousness for the cosmic egg. In reply Lord Vishnu materialized there. He transformed into a shape having infinite dimensions, thousand of heads, eyes and feet. In that form he entered into the egg which became alive with that. Lord Shiva and Lord Vishnu built there own domains inside.

Meanwhile Lord Brahma began to create. It began with three formats and five elements, multiplied by their compounds. The eight were the primary tools of creative exercise. The ninth format was kumara, which produced men of spiritual wisdom, sages, holy persons and seers. Sanaka and Sananda were its products. Lord Brahma wanted them to assist him in creative exercise, but they made excuses and abandoned him. It hurt Lord Brahma.

Earlier, in the earth chapter of creation, ignorance and negative factors (Tamas) were born followed by solid state living and non-living things like mountains, plants, trees and other immovables. Beasts and birds came later followed by humans at later stage. This part of creation immensely pleases and satisfied Lord Brahma. But the betrayal of his own son-like Kumara products was a great disappointment. To sad Lord Brahma, Lord Vishnu advised to seek the grace of Lord Shiva. So, Lord Brahma made penance to propitiate Lord Shiva.

As Prophesied earlier by Lord Shiva, from the central part of the forehead, just above the eyes of Lord Brahma, Lord manifested _Ardhanareeshwara _(half man - half woman figure) accompanied by a host of divine guards and servitors called ganas. In this way the Rudra dimension of Lord Shiva materialized. It was the destroyer aspect of Lord Shiva. 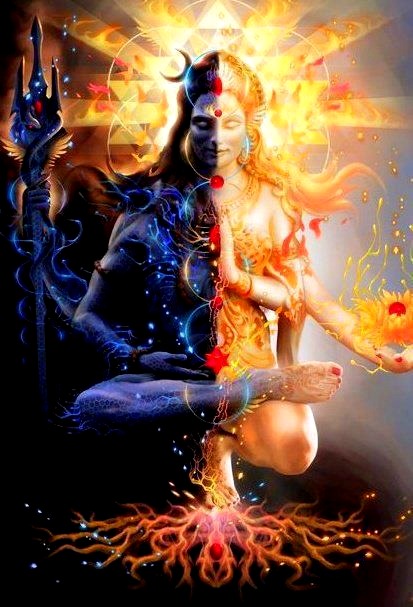 Meanwhile, the creation of Lord Brahma was stagnating. No regeneration was taking place, the creatures were just aging without dying or falling ill. Lord Shiva had manifested in ‘half man - half woman’ form to convey the message that regeneration was possible only through interaction between the two sexes. He explained to Lord Brahma orally as well. Lord Brahma was advised to create creatures in gender format and the species who would be subject to birth, death and other calamities. So advising and duly blessing creator, lord Rudra vanished.

By the grace of Lord Shiva and inspiration provided by Lord Rudra, Lord Brahma transformed half of his person into female anatomy. The interaction between the gender halves produced a male called Manu and a female in Shataroopa. the two were paired by creator to beget two sons, Priyavrata and Uttanpada, and three daughters Akooti, Devahooti and Prasooti. They were respectively coupled with Ruchi, Kardama and Daksha.

Yajna and Dakshina were born to Akooti. Their pairing produced a dozen sons. Devahooti and Prasooti begot large broods of daughters. Thirteen of them namely Lakshmi, Shraddha, Dhriti, Tushti, Pusti, Medha, Kriya, Buddhi, Lajja, Vasuva, Santhi, Siddhi and Kriti were all married to Dharma. The others; Khyati, Neeti, Sambhuti, Samriti, Preeti, Kshama, Sannuti, Anuroopa, Voorja, Swaha and Suddha were paired with Bhrigu, Dharma, Marichi, Angirasa, Paulastya, Pulaha, Kratu, Atri, Vashistha, Agni and Poorvaja respectively. The grooms were all either sages or deities. Those pairs gave birth to great many brilliant characters and brightened up the world.

Sixty daughters Daksha had, out of which he gave thirteen to Kashyapa and one ‘Sati’ to Lord Shiva. Others went to various other legendary characters. Kashyapa’s spouses gave birth to broods that filled the earth world and populated it in form of trees, plants and insects, devas, rakshasas, humans, giants, kinnars, gandharvas, yakshas, men-o-snakes, demons, warriors, sages, peers, holymen, kings, rishis, birds, mountains etc. That is why it is said, the earth is kashyapised world.

These primary legends remain the same through ages, only adding new episodes, manifestations, villains and sub-legends with the passage of time.

The domain of Lord Shiva dominates all other domains. In his domain Supreme Deity lives with his consort Power Latent (Adi-Shakti). Kailasha is his domain that survives all dooms and remains resplendent as ever.