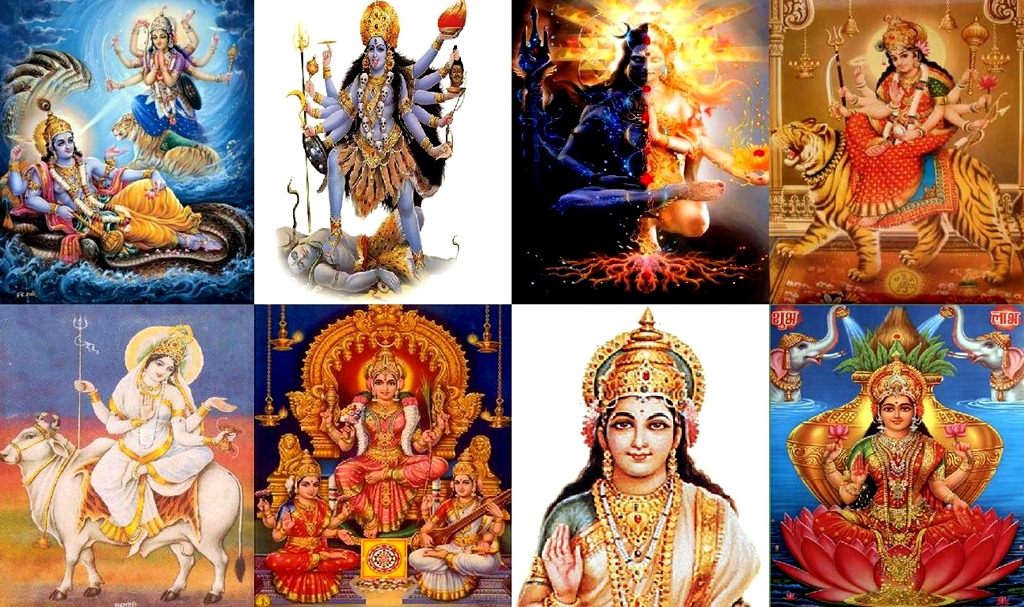 At the very beginning of the creation water came into existence by the will of force eternal Lord Shiva. In water, Lord Vishnu vested. A long penance tired him out and he went to deep sleep of yoganidra. From the ear wax of Lord Vishnu got two mighty demons created who were called Madhu and Kaitabha. For a long period they made penance and got the blessings of Power Eternal Mahamaya. Meanwhile, a lotus stalk had emerged from the navel of sleeping Lord Vishnu and Lord Brahma appeared atop the flower. The demons spotted him and began to harass him. The frightened Brahma tried to seek protection of Lord Vishnu but he found the latter withdrawn into yoganidra. In desperation, Lord Brahma prayed to Mahamaya. She answered his prayer by manifesting as Mahakali on the twelfth day of the first fortnight of Phaluguna. She woke up Lord Vishnu by exiting from his eyes as Yogmaya. 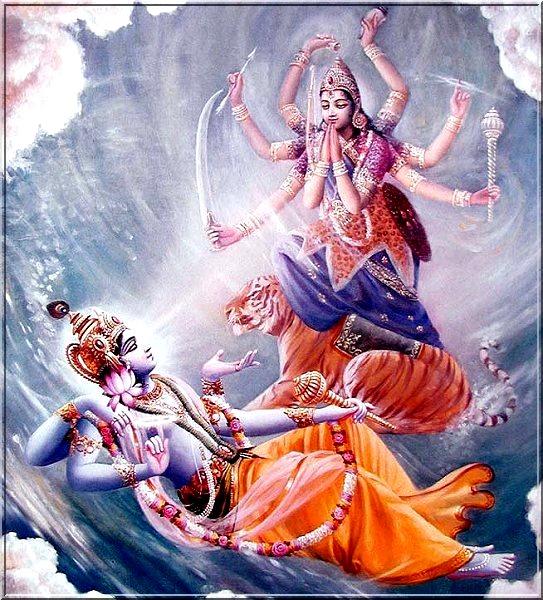 To defend Lord Brahma, Lord Vishnu challenged the demon duo and fought with them for five thousand years but failed to subdue them. Then, Lord Vishnu invoked Mahamaya and prayed for her help. Mahamaya befuddled the minds of demon duo and made them tell Lord Vishnu how they could be accounted for. So Lord Vishnu put their heads on his widened thighs and killed them as that was the only way possible. 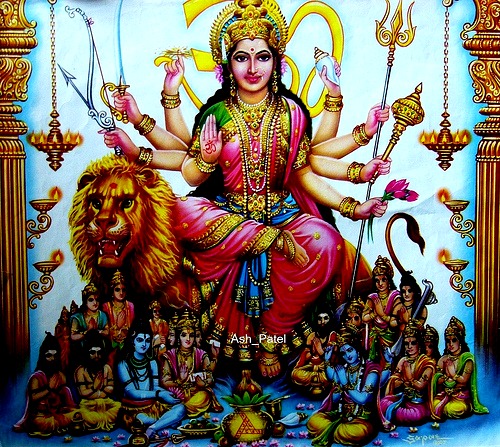 The demon lord Rambhasura was a mighty one who had become a scourge of the gods. His son Mahishasura was even mightier than him and was a repository of more evils. He was a very ambitious demon and to realise his demonic dreams he made a hard penance to propitiate Lord Brahma. From Lord Brahma he got a boon that no man or god shall ever kill him. After gaining that boon he went berserk tormenting all the three worlds. He raided heaven and banished gods from there. The deities of the directions were under his constant threat and punishment. Then he targeted all the people who used to worship deities and celestial beings. He banned all religious rites and ceremonies. No yajna no havana and no worship was his monstrous order.

The deities and the gods went to Lord Brahma seeking deliverance from the tyranny of Mahishasura. Lord Brahma took them to Lord Vishnu as the former had himself booned the demon. Lord Vishnu advised that they must all go to Lord Shiva to seek his help. They all paid to Deity Supreme. Lord Shiva revealed that the demon could be killed only by a female character as he could not die at the hands of a male due to his boon. Lord Brahma, Lord Vishnu and Lord Rudra shot out light balls of their divinity which fused in one radiant body. The other gods shot into it their own respective beams. Thus amplified ball of light transformed into a goddess figure of Mahalaxmi, also called ‘Jagdamba’. She was a picture of valour. Her face radiated the divinity of Lord Shiva and the other parts of her body represented the divinity of other gods. She had lord Vishnu arms and thighs and the legs of Lord Brahma. Yama was in her hair and she rode a lion.

The divine lords lent her their powers. She got the trident of Lord Shiva, Sudarshan Chakra of Lord Vishnu, Thunderbolt of Indra, Armour from Vishwakarma, Heat from Agni, Carrying Bowl of Lord Rama, Time scale and shield from Yama, Storm from Pavana, Liquidity from Varuna, Rays from Surya and the other gods empowered her according to their own divine capacities. Thus power packed Mahalaxmi rode that reverberated through the universe. It elated the hearts of the gods.

They all prayed to deliver them from the torments of evil Mahishasura. She assured them of her protection and the independence from the demonic tyranny. She went to the ground outside the palace of the demon and let out a mighty roar which shook the entire universe.

Angry demons came out to meet the challengers. There were great demonic battlers in Chiksura, Chandra, Udagara, Kerala, Bhaksha etc. besides Mahishasura.

The two armies clashed. To help Mahalaxmi, the host of the gods had also followed her but the most of the fighting was being done by the goddess herself. She killed several renowned demon warriors in no time. Very soon all the big names of the demons except Mahishasura had become history. It angered the demon lord. The demons of the order of Mahishasura were basically wilder beasts who could transform into any animal shape.

Angry Mahishasura charged in his bull buffalo form at Mahalaxmi and herarmy.He played havoc with the gods who prayed to the goddess to deal with the demon. She tossed a lasso at the demon buffalo and seized it. To get off the noose the demon transformed into a lion and tried to clobber the lion the goddess was riding. Mahalaxmi raised her sword to slay the enemy lion but he instantly reverted to his demonic form. The goddess attacked with her sword, spear and arrows to confuse her enemy.

Mahishasura transformed into an elephant and trumpeted violently. Mahalaxmi cut it’s tongue in a swift move. The demon again changed his form and resorted to demonic poltergy creating great many illusions. The goddess took a swing from her divine flagon of wine gifted to her by Kubera. Then she blew her conch shell in fury creating shock waves and let out a thunderous laughter that made Mahishasura tremble. With a beastly roar she jumped at Mahishasura and stomped him down to earth. Her foot was on the demon neck and her trident impaled the face of her enemy and she lifted him up in the air as if raising the flag of her victory. 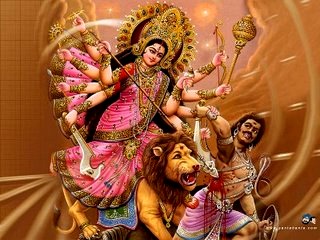 The Scene frightened the demon army and it fled in all directions in fright. The delighted gods rained down flowers from the heaven to celebrate the victory and kettle drums were beaten. The gods assembled around Mahalaxmi and sang her prayers requesting her to keep her protection extended to the noble forces forever.