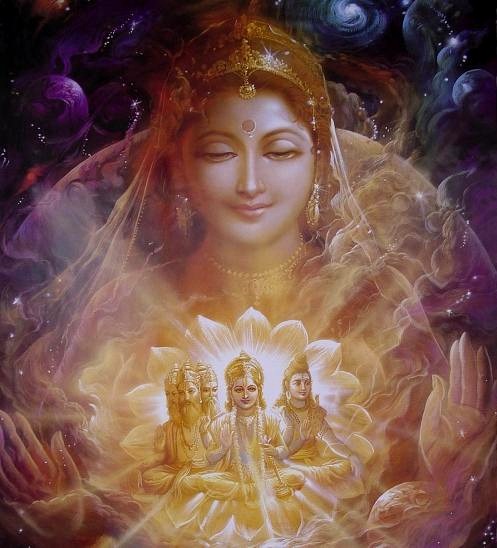 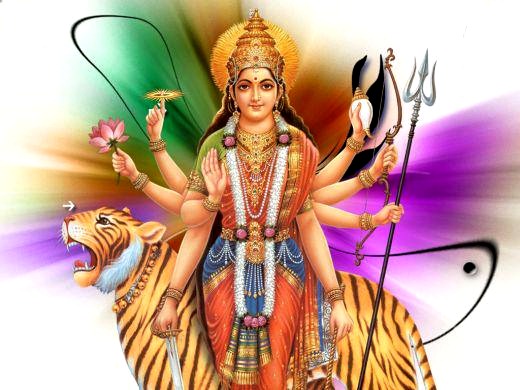 Once there existed two demon brothers called Shumbha and Nishumbha. They were mighty and very big trouble makers. All the three worlds and their populaces were living under the fear of those two demons. They had let loose a rule of tyranny. The gods and other celestial races had fled to the caves and forests to hide. That made the demon duo more arrogant and cruel.

The gods were advised by Brihaspati and Lord Brahma to seek the help of Goddess Parvati (Uma manifest). The gods went to the forest where Goddess Parvati was making penance to sort out her own problems. To help the gods she created her alter-ego out of her call. This new manifestation of her was called Gauri (The white one) since she had a spotless milk white skin. She was also known as Kaushiki for being born out of a cell (Kaushika). She astride a tiger armed with many fangled divine weapons. An incredible beauty she was and drank wine from a silver flask that dangled from her waist. Her skin was so clear that the gods could see red liquid going down her throat. Like a big cat she growled angrily. The over whelmed gods sang paeans to her as she made the universe shudder. She needed no briefing as she had heard the woes of the gods revealed wen she was a part of Goddess Parvati.

She flashed to a garden outside the palace of the evil demon pair of Shumba and Nishumbha. The demon commanders called Chanda and Munda saw her there. The beauty of Gauri stunned them. They ran to their demon pair of masters, Shumbha and Nishumbha with the news of the arrival of a unique beauty in the garden that deserved to the grace the palace of the demons. They had no words to explain her beauty correctly.

It excited Shumbha and Nishumbha. They sent some messengers to Gauri proposing her to marry one of the two and enjoy all the luxuries and splendours of the palace. Gauri revealed that she was avowed to marry only a person who would defeat her in a battle. The demon lords thought it was below there dignity to fight a tender girl of the weaker sex. It was some joke, they thought. So they sent their commander, Dhoomralochana to reason with her and if it did not work he was asked to bring her to palace by force. The demon got burnt to ashes by an angry gaze of Gauri. Then the demon duo sent their warriors Chanda and Munda with a host. A growl of Gauri blew away the demon host. She grabbed the fleeing Chanda and Munda and killed them. For killing Dhoomralochana, Devi got the epithet of ‘Dhoomravati’ and for slaying Chanda - Munda she gained the adjective name of ‘Chandika’.

Then, demon lords sent Raktabeeja demon to teach a lesson to the irrepressible Gauri. The every drop of blood of that demon fallen on ground could produce another demon like him. It created a problem for Gauri. To counter it Gauri produced many dark manifestations of her called Kaalis who drank the blood of Raktabeeja by collecting it in coconut shells to prevent its being spilled on the ground. Thus Gauri was able to slay demon Raktabeeja. Now Shumbha and Nishumbha had to come to the battle.

The demon duo again tried to entreat her to stop battling and marry them to make them her slaves for ever. Gauri challenged them to defeat her in battle if they were real men and prove that they were worth marrying. To impress their lords, warriors came forward to challenge Gauri who rained arrows at them killing most of them and making the rest fall back. Shumbha was dismayed, Nishumbha moved forward and spoke - “O beauty, why should you kill our poor soldiers with arrows when you can kill us with your one askance glance?” Gauri gave him a treat of a volley of her deadly arrows. Nishumbha had to engage in a battle with her. Devi Gauri’s arrows destroyed all his demonic weapons and then felled him to ground as Shumbha watched in shock.

The death of his brother angered Shumbha and he moved forward to challenge Gauri. Finding him in front of her made her let out great roar that sounded like a thunder clap followed by a rumble. It put scare into the demon host that trembled. Shumbha launched a fiery weapon on Gauri which the latter cut to pieces with her arrows. Then, Devi threw her glimmering trident at the demon that went through latter’s rib cage to protrude its dents from the back. The wounded Shumbha staggered towards his female foe with his sword raised. Gauri released her deadly chakra and beheaded the evil demon. The bulk of the demon collapsed the ground. Devi’s tiger devoured the dead demons.

The gods rained down flowers and sounded bugles and kettle drums to hail the victory of Goddess Gauri. The celestial rhapsodists sang her paeans. 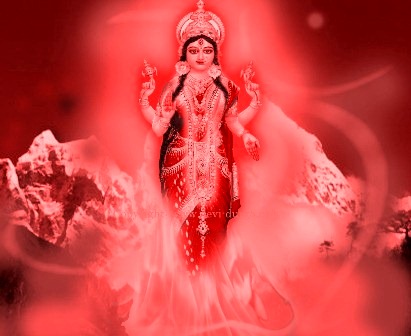 Once again yet another battle was fought by the gods and the demons against each other. This time the gods won and the defeated demons had to flee to the bottom world of Patala.

This victory was secured without seeking the help or blessings of The Trinity. It filled the hearts and the minds of the gods with arrogance. Big egos they grew. They got so overblown that they talked of nothing but their valour, endeavour, battle skills, courage, grit, will power, divinity, wisdom etc. The unmanifest power eternal, Uma felt the gods needed to be corrected and some sense put back into them. In the domain of the gods she mysteriously manifested in the form of a giant and radiant female figure of Yaksha. The gods saw it wondered who or what it was. No one had any idea. Yaksha herself did not bother to reveal anything deepening the enigma.

Mystified Indra sent Vayu, the wind god to find out who the intruder was. To Vayu’s query about her identity she did not reply and ask who he was. The wind god introduced himself and extolled his own divine powers of creating storms, tornadoes, typhoons etc. The Yaksharoopa put a straw on the ground and asked him to blow it away. Vayu used all his powers but the straw remained inert at its place. Yaksharoopa smiled mockingly. Embarrassed Vayu returned to Indra in defeat.

Then, Indra sent Agni, the fire god to investigate. When asked to introduce himself Agni boasted about his incendiary powers. Yaksharoopa again put straw in front of him and asked him to demonstrate his burning powers. Agni used all his powers but straw remained there unaffected. He too went back defeated. Indra sent other powerful gods to try their powers but all returned with long faces and bent heads.

It greatly surprised the celestial lord, Indra. He himself went to see the mysterious figure. But Yaksharoopa had vanished. He stood puzzled. Then, Saraswati, the goddess of knowledges whispered into his mind to use common sense to know who it could be? It was primordial Eternal Force! The truth suddenly dawned on Indra. He at once prayed to the Force Eternal. It manifested in form of Uma to speak," Look, I am the divinity of Brahma,Vishnu and Mahesh. Even they are nothing without my grace. I provide to you all the powers you have that earn you victories. If I withdraw those powers all your gods will be reduced to nothing. So, you must not become self conceited. Humility should be your asset. One who grows ego he works his own downfall."

Indra promised that he and other gods would never again fall pray to ego. He prayed for her grace.