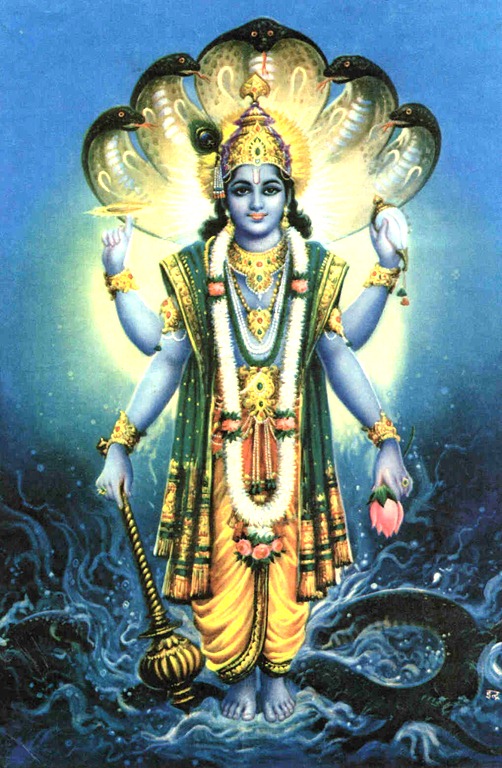 An avatara is an incarnation, which that a god adopts a human form to be born on earth. The purpose is to destroy evil on earth and establish righteousness. Lord Vishnu is regarded as the preserver of the universe and it is therefore Lord Vishnu’s incarnations that one encounters most often. Lord Vishnu has already had nine such incarnations and the tenth and final incarnation is due in the future. These ten incarnations of Lord Vishnu are :-

Many years ago, the whole world was destroyed. The destruction in fact extended to all the three lokas (Worlds) of bhuloka (Earth), bhuvarloka (Region between Earth and heaven) and svarloka (Heaven). All there worlds were flooded with water. Vaivasvata Manu(Son of the sun-god) had spent ten thousand years in prayers and tapasya (meditation) in the hermitage varrika, which was on the banks of river Kritamala. Once Manu came to the river to perform his ablutions. He immersed his hands in the water to get some water for his ablutions. When he raised them, he found that there was a small fish swimming in the water in the cup of his hands. Manu was about to throw the fish back into the water then the fish said, “Don’t throw me back. I am scared of alligators and crocodiles and
big fishes. Save me.”

Manu found an earthen pot in which he could keep the fish. But soon the fish,became too big for the pot and Manu had to find a larger vessel in which the fish might be kept. But the fish became too big for this vessel as well and Manu had to transfer the fish to a lake. But the fish grew and grew and became too large for
the lake. So Manu transferred the fish to the ocean. In the ocean, the fish grew until it became gigantic. By now, Manu’s wonder knew no bounds. He said,“Who are you? You must be the Lord Vishnu, I bow down before you. Tell me, why are you tantalising me in the form of a fish?”

The fish replied, “I have to punish the evil and protect the good. Days from now, the ocean will flood the entire world and all beings will be destroyed. But since you have saved me, I will save you. When the world is flooded, a boat will arrive here. Take the saptarishi’s (seven sages) with that boat. Don’t forget to take the seeds of food grains with you. I will arrive and you will then fasten the boat to my horn with a huge snake.” Saying this, the fish disappeared.

Everything happened as the fish had promised it would. The ocean became turbulent and Manu climbed into the boat. He tied the boat to the huge horn that the fish had. He prayed to the fish and then fish related the Matsya Purana to him. Eventually, when the water receded, the boat was anchored to the topmost peak of the Himalayas and living beings were created once again. An Asura (Demon) named Hayagriva had stolen the sacred texts of the Vedas. In his form of a fish, Lord Vishnu also killed Hayagriva and recovered the Vedas. 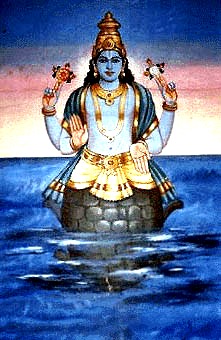 Many years ago there was a war between the devas (Gods) and the daityas (Demons) and Gods lost this war. They prayed to Lord Vishnu to rescue them from the oppression of the demons. Lord Vishnu told Lord Brahma and the other gods that they should have a temporary truce with the demons. The two sides should get together to churn the ocean. Lord Vishnu would ensure that the gods would benefit more from this churning of the ocean than the demons. The truce was agreed upon and the two sides got ready to churn the ocean. Mountain Mandara was used as a churning rod and great snake Vasuki as the rope for churning. Gods grasped Vasuki’s tail and demons grasped Vasuki’s head. But as the churning began, the mountain Mandara which had no base, started to get immersed in the ocean. Then Lord Vishnu came to the rescue. He adopted the form of a turtle and the peak was balanced on the turtle’s back. As the churning continued, terrible poison named Kalkuta emerged from the depths of the ocean and was swallowed by Lord Shiva. Lord Shiva’s throat became blue from this poison and he is therefore known as Neelkantha (Blue of throat). Goddess Varuni (Goddess of wine) came out next, the gods readily accepted her. She was followed by the Parijata tree, a beautiful tree that came to occupy the pride of place in Lord Indira’s garden. A jewel named koustubha emerged and was accepted by Lord Vishnu as his adornment. Three wonderful animals came out next – the cow Kapila, the horse Ucchaishrava and the elephant Airavata. They were followed by the Apsaras, who became the dancers of heaven. Goddess Lakshmi or Shri came out next and was united with Lord Vishnu. Finally, Dhanvantari (Originator of Ayurveda) emerged with a pot of amrita (the life giving drink) in his hands. Demons led by Jambha gave half of the amrita to gods and departed with the remaining half. But Lord Vishnu quickly adopted the form of a beautiful woman. So beautiful was the woman that the demons were charmed. “Pretty lady,” they said. “ Take the amrita and serve it to us. Marry us.” Lord Vishnu accepted the amrita, but he had no intention of giving it to the demons. He served it to the gods instead. There was only one demon named Rahu who adopted the form of Chandra (Moon god), and succeeded in drinking some of the amrita. Lord Vishnu there upon cut off Rahu’s head with his sword but Rahu had drunk the amrita, so he could not die. He prayed to Lord Vishnu and he granted him a boon that occasionally Rahu would be permitted to swallow up the sun and moon (Solar and Lunar eclipse). Thus, gods defeated the demons and regained heaven.