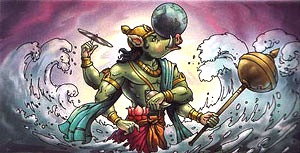 Lord Vishnu’s third incarnation was in the form of a boar. Sage Kashyapa and his wife Diti had a son named Hiranyaksha, who became the king of the asuras (Demons). Hiranyaksha’s meditation pleased Lord Brahma and Lord Brahma granted him the boon that he would be invincible in battle. Thus armed, Hiranyaksha went out to fight with the devas (Gods). He comprehensively defeated the gods and conquered heaven. He also defeated Lord Varuna (God of the ocean). Thus, Hiranyaksha became the king of heaven, Earth and the underworld. But he was not particularly fond of the earth and he himself had begun to live in Lord Varuna’s palace under the ocean. So he hurled the earth into the depths of the ocean. Gods went to Lord Vishnu and prayed that something should be done about Hiranyaksha. They wished to be restored to heaven and they wished that Earth should be brought back from the depths of the ocean. In response to these prayers, Lord Vishnu adopted the form of a boar and entered the ocean. Hiranyaksha did not know that this boar was none other than Lord Vishnu. He thought that it was an ordinary boar and attacked it. The two fought for many years. But finally, Hiranyaksha was gored to death by the boar’s tusks. The boar raised the earth up once again with its tusks. Lord Vishnu thus saved the gods and the principles of righteousness or dharma.

Hiranyaksha had a brother named Hiranyakashipu. Hiranyakashipu was furious to know that his brother has been killed and pledged to kill Lord Vishnu. But this could not be done unless he himself became powerful and invincible. Therefore, he began to pray to Lord Brahma through difficult meditation. Lord Brahma was pleased by his prayers and offered to grant a boon. Hiranyakashipu said – “Please grant me the boon that I may not be killed at night or day, by a man or a beast and that in the sky, the water or Earth.” Lord Brahma granted the desired boon.