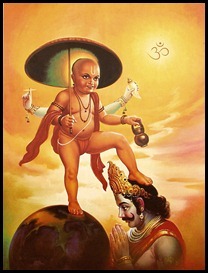 Prahlada’s grandson was Bali Chakravarthi and he was one of the greatest kings. Though he was a demon by birth, he never deviated from the path of Truth and Dharma (religious ethics). His power and strength kept on increasing as he has been following Dharma. With the help and advice of his preceptor, King Bali had conquered all the three worlds, and dethroned Indra from Heaven and occupied Amaravathi, the capital of Indralok.

Indra got scared and went to Lord Vishnu for help. Lord Vishnu incarnated as the dwarf Vamana and tricked Bali to grant him as much of his kingdom as he could measure in 3 steps.

With the first step he covered all of Earth. With the second step he covered all the heavens. But there was no place for the third step. Then Vamana questions Bali where he could place his third foot? King Bali realized that he is short of fulfilling his promise given to Vamana. He surrenders completely before the Lord, and bends his head where the third foot could be placed to fulfill his promise, pushing Bali to the underworld. 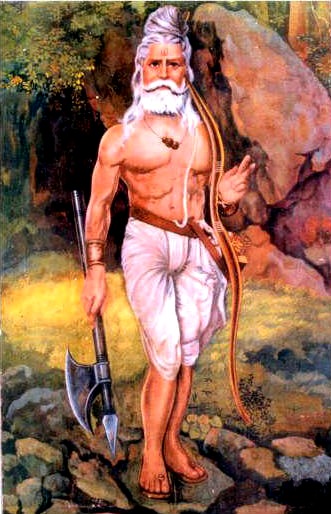 The Kshatriyas (Warriors) were the second of the four classes. It was their job to wear arms and protect the world and rule. The Brahmans (Sages) were the first of the four classes. It was their job to pray, study the sacred texts and perform religious rites. But the Kshatriyas became very insolent and began to oppress the world and the Brahmans. Lord Vishnu was then born as the son of the sage Jamadagni and his wife Renuka, named Parshuram. Parshu means axe, hence his name literally means Ram-with-the-axe. He received an axe after undertaking a terrible penance to please Lord Shiva, from whom he learned the methods of warfare and other skills. Even though he was born as a Brahmin, he had Kshatriya (warrior) traits in terms of aggression, warfare and valour. Since this was the line of the sage Bhrigu, Parashurama was also called Bhargava. Lord Parashuram’s mission was to protect the Brahmans and teach a lesson to the Kshatriyas. There was a king named Kartavirya who had received all sorts of boons from the sage Dattatreya. With these boons, Kartavirya had a thousand arms; he conquered and ruled over the entire world. One day, Kartavirya went on a hunt to the forest. He was very tired after the hunt and was invited by the sage Jamadagni. He had a kamadhenu cow; which means that the cow produced whatever its owner desired. Jamadagni used the kamadhenu to treat Kartavirya and all his soldiers to a sumptuous feast. Kartavirya was so enamoured of the kamadhenu that he asked the sage to give it to him, but Jamadagni refused. Kartavirya then abducted the cow by force and a war started between Kartavirya and Lord Parashuram. In this war, Lord Parashuram cut off Kartavirya’s head with his axe (parashu) and brought the kamadhenu back to the hermitage. After some time, Lord Parashuram was away when Kartavirya’s sons arrived at the ashram and killed Jamadagni. On the death of his father, Lord Parashuram’s anger was aroused. He killed all the Kshatriyas in the world twenty-one times. On the plains of Kurukshetra, he built five wells which were filled with the blood of Kshatriyas.

He is a Chiranjeevi (Immortal) who fought the advancing ocean back, thus saving the lands of Konkan and Malabar. He has been a Guru to Bhishma, Dronacharya and later also to Karna. He taught Karna the extremely powerful Brahmastra (a celestial weapon).

Lord Parshuram lives on earth even today as he is immortal. The Kalki Purana states that Lord Parshuram will be the martial guru of Sri Kalki, the tenth and final Incarnation of Lord Vishnu. It is he who instructs Kalki to perform a long penance onto Shiva to receive celestial weaponry