Lord Krishna was born during turbulent times in Mathura. Kansa, son of Ugrasena, audaciously disbanded the Yadava ruling council and declared himself dictator of Mathura with the support of his father-in-law, Jarasandha, the powerful king of Magadha. All those who protested were either killed or imprisoned.

Kansa’s younger sister, Devaki had married Vasudeva. On the wedding day, oracles foretold that the eighth child born of this union would be the killer of Kansa. A terrified Kansa wanted to kill his sister, but was persuaded to let her live on condition that Vasudeva would present to him their eighth child as soon as it was born.

When Devaki bore her first child, Kansa became nervous. He stormed into her chambers, grabbed her firstborn by ankles and smashed its head against the stony floor. And so it came to pass, Devaki kept producing children and Kansa kept killing them as soon as they were born.

Thus were killed six children of Devaki and Vasudeva. The Rishis revealed –“Your children suffer the pain of dying at birth because in their past life they angered sages with their misbehaviour. And you suffer the pain of watching them die because in your past you angered sages by stealing cows for your yagna. All suffering has its roots in karma. But fear not, the seventh and eighth child will bring you joy. The seventh will be the herald of God. The eighth will be God himself.”

When Devaki conceived the seventh child. A goddess called Yogamaya magically transported the unborn child into the womb of Vasudeva’s other wife Rohini, who lived with her brother Nanda in the village of cowherds, Gokul, across the river Yamuna. The child thus conceived was Balarama, fair as the moon, strong as a herd of elephants. He was an incarnation of Adi-Ananta-Shesha, the serpent with thousand hoods in whose coils rests Lord Vishnu. 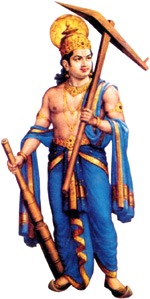 When Lord Vishnu plucked a dark hair from his chest and placed it in Devaki’s womb, thus was conceived her eighth child. He slipped out of his mother’s womb nine months later on a dark and stormy night. He was as dark as the darkest night and as charming as the sun is to a lotus flower.

Yoagamaya caused the whole city to sleep and advised Vasudeva to place the child in a basket and take it out of the city, across the river, to Gokul. 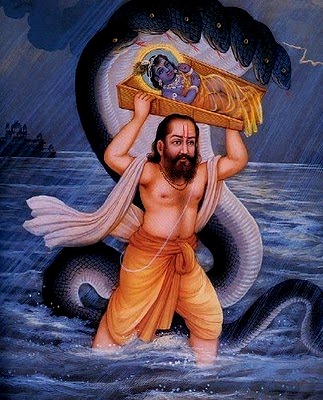 At Gokul, in the cattle sheds, he found Yashoda (Nanda’s wife), sleeping with a newborn girl beside her. Instructed by Yogamaya, Vasudeva exchanged the babies and returned to Mathura.

The Next day, Kansa strode into Devaki’s chamber and picked up the eighth child with an intent of dashing her head to the ground. But the child slipped out of his hands, flew into the sky, and transformed into a splendid goddess with eight arms, each bearing magnificent weapons and announced that the killer of Kansa was still alive and that Kansa would die as foretold.

Lord Krishna meanwhile grew up among gopas (Cowherds) and gopis (Milkmaids) of Gokul. The arrival of Lord Krishna changed everything in Gokul. His life, right from his birth, was an adventure.

Kansa sent Putana, a wet-nurse who had poison in her breasts, to kill all the newborns around Mathura. But when Lord Krishna sucked on her breasts, he sucked out not only the poison but also Putana’s life.

Such incidents with the demons so frightened Yashoda that she insisted that the entire village move from Gokul to a more auspicious place on the banks of river Yamuna, next to Tulsi plants, at the base of the Govardhan hill. It came to be known as Vrindavan.

Here Lord krishna grew up with a fondness for butter. Nothing gave him greater pleasure than raiding the dairies of milkmaids and stealing all that had been churned ans stored in pots hanging from the rafters.

As Lord Krishna grew he opposed the blind rituals of the Rishis; he preferred acts of charity and devotion. Every year. Kansa performed a great yagna where ghee was poured into fire to please Indra, the rain God. Lord Krishna opposed this practice. When the villagers decided not to send ghee from the village for the yagna, Indra got angry and caused torrential rain to fall flooding the village.

It was then that Lord Krishna picked up the Govardhan mountain with his little finger and raised it, turning it into a giant parasol that protected the whole village from the downpour. It was enough to tell Indra that Lord Krishna was no ordinary man, he was God on Earth. 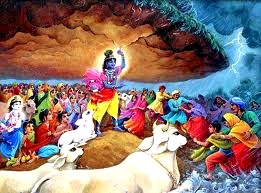 Every night, outside the village, in forest, on the banks of Yamuna, in a meadow known as Madhuvan that was full of fragrant flowers, Lord Krishna would stand and play the flute. All the milkmaids would leave their homes while the rest of the family slept, and come to this meadow to dance around Lord Krishna. This was their special pleasure. 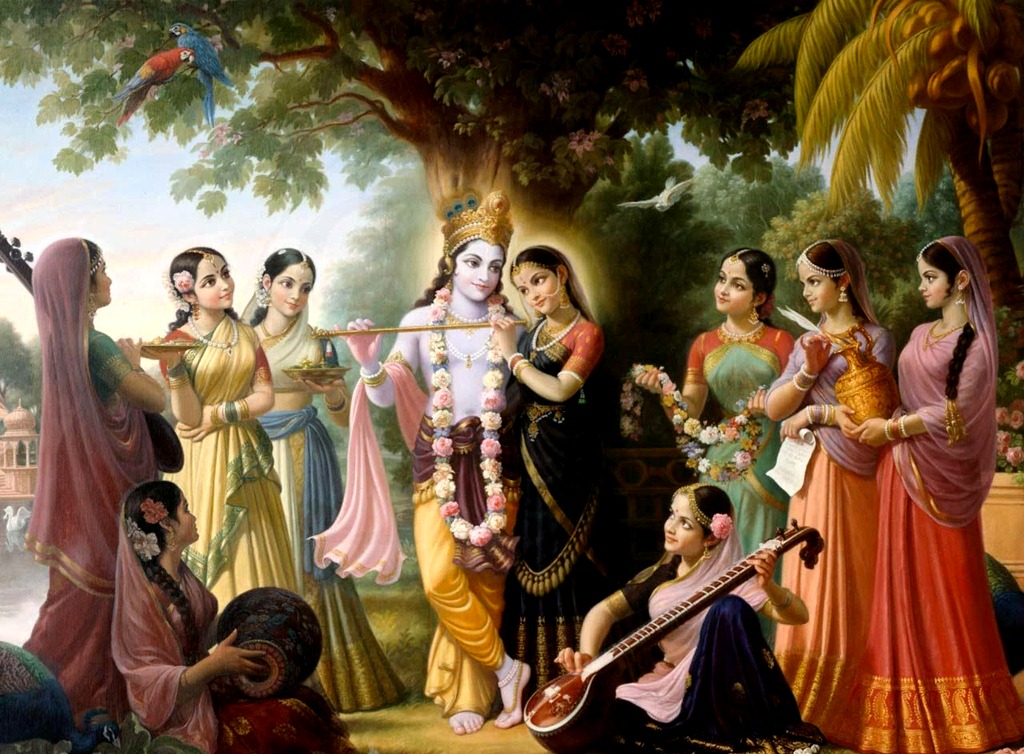 This wonderful relationship of Lord Krishna with the milkmaids came to an end when Kansa sent a chariot to Vrindavan ordering Lord Krishna to come to Mathura and participate in a wrestling competition. Balarama accompanied him.

No sooner Lord Krishna entered the city of Mathura and won the hearts of the Yadavas with his strength and beauty. Fearlessly, Lord Krishna killed Kansa’s washerman who had showered abuse on him. He then broke the royal bow on display and subdued the royal elephant who tried to block his path to the arena. Lord Krishna and Balarama then defeated all the wrestlers of Mathura. The audience cheered the two making Kansa angrier than ever. Kansa ordered that Lord Krishna and all those who had cheered him be killed. In response, Lord Krishna pounced on Kansa and smote him to death. 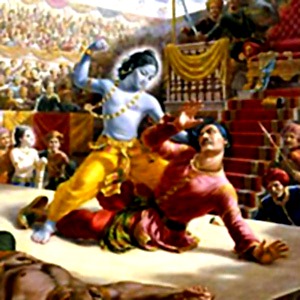 Having killed Kansa, Lord Krishna was hailed as the liberator of the Yadavas. His true identity as the son of Vasudeva and Devaki was revealed. He was recognized as a Kshatriya, a decendant of Yadu.