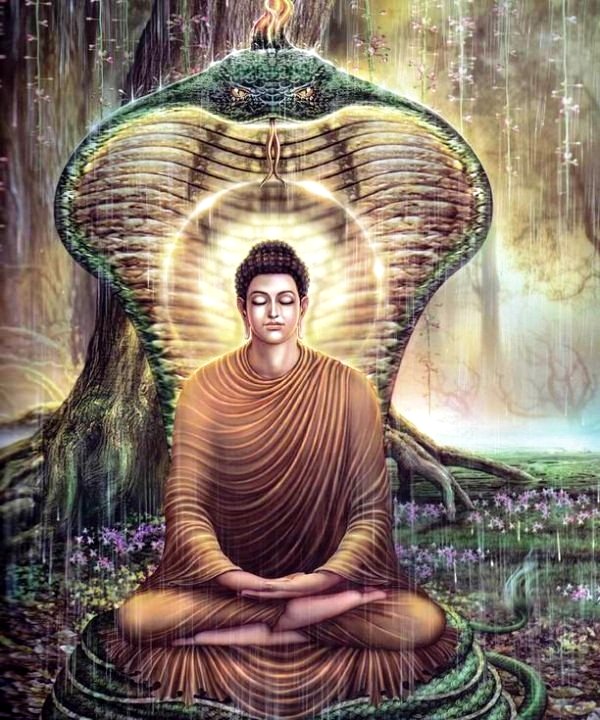 With the departure of Lord Krishna, the Kali yuga set in. In this age, the true devotion to Vedas was replaced by empty rituals. To enlighten the world, Lord Vishnu descended to Earth as Lord Buddha, the enlightened one.

Lord Buddha was born as the crown prince of the Kapilavastu to King Suddhodana and Queen Maya. He was named Siddhartha, meaning “All thing fulfilled”. On his birth the wise men made predictions – “O King,” they said, “the signs of the Prince’s birth are most favourable. Your son will grow up to be even greater than you are now!”

Later an old sage named Asita, who lived by himself in the distant forests visited the palace to see the new born. The King and Queen were Surprised that Asita would leave his forest home and appear at their palace. The king was very happy and excited, he brought the baby to sage Asita. For a long time the holy man gazed at the infant and then said – “Oh dear king, If your son decides to stay with you and become a king, he will be the greatest king in history. He rule a vast realm and bring his people much peace and happiness. But if he decides not to become a king, his future will be even greater! He will become a great teacher, showing all people how to live with peace and love in their hearts. Seeing the sadness in the world he will leave your palace and discover a way to end all suffering. Then he will teach this way to whoever will listen.” 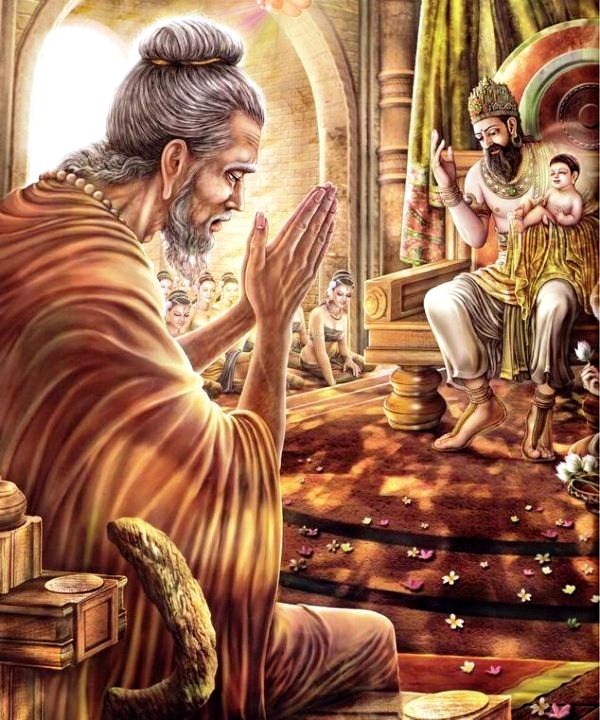 Siddhartha was destined to lead a luxurious life as a prince and had three palaces, for three different seasonal occupations, especially built for him. King Suddhodana’s wish for Siddhartha was to become a great king and so he shielded him from religious teachings or any knowledge
of human suffering. When he was seven, the Prince began to receive scholarly instruction from the Institute of Vissavamitr, which was the best education a Prince could receive. But on the seventh day of his study he had graduated and become an expert in all forms of knowledge.

When the Prince reached the age of sixteen, the King arranged his marriage to Princess Yasodhara. 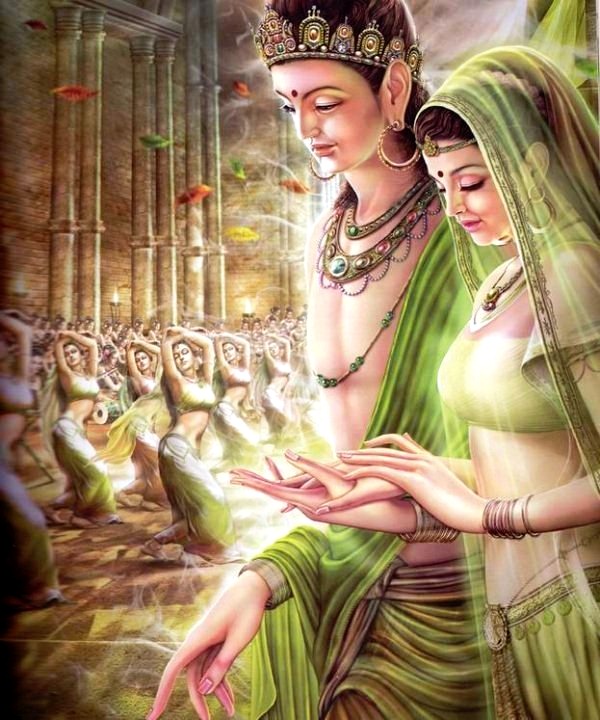 Although she was beautiful and he himself was continually surrounded by beautiful female servants and slaves,Prince Siddhartha was not satisfied simply with this beauty and felt that there was more to a person’s life than wealth and beauty. He looked around his palace and he found nothing to satisfy his quest to seek out the answers to his questions. One day he was traveling out of the palace walls with his charioteer, Channa. In the city, he found living beings: a new born child, a diseased man, an old and decaying corpse, and finally an ascetic.

On that day, after returning to his palace, his son, Prince Rahula, was born. Siddhartha felt that he, his wife, his new born son, and all people would be living under the same cycle of beings that he had seen that day. He considered his own predicament, thought about his talents and potential, and became determined to set himself, and all others around the world, free from this cycle of suffering. He, alone, would find the answer. 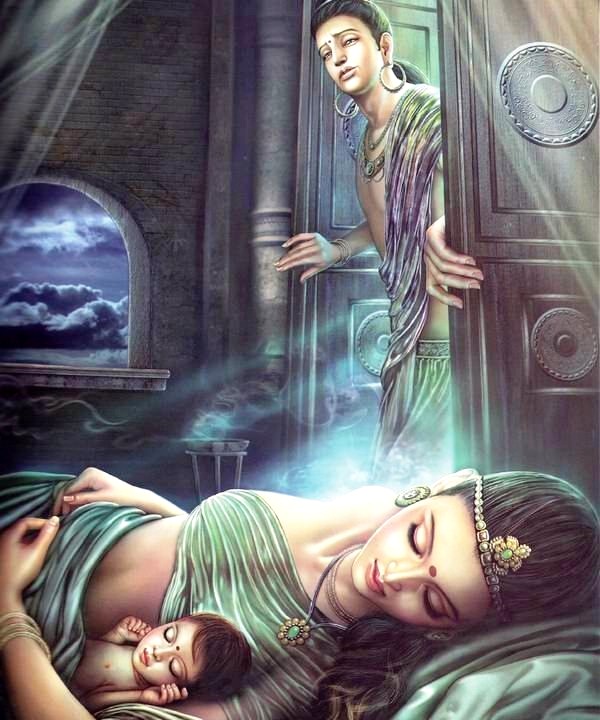 At the age of 29, Siddhartha escaped from his palace, accompanied by Channa, aboard his horse Kanthaka. He left his royal life to become a mendicant. It is stated in the scriptures that, “…the horse’s hooves were muffled by the angels in order to prevent guards from knowing that the Bodhisattva had departed.” Before his departure, however, Mara (evil) appeared to him to try and stop him from leaving, to which Siddhartha replied –“You are a wicked tempter. I will cross endless oceans to pursue my path. I will cross countless pits of fire regardless of their size. Neither great evil nor great goodness (wealth) will prohibit me from going.” 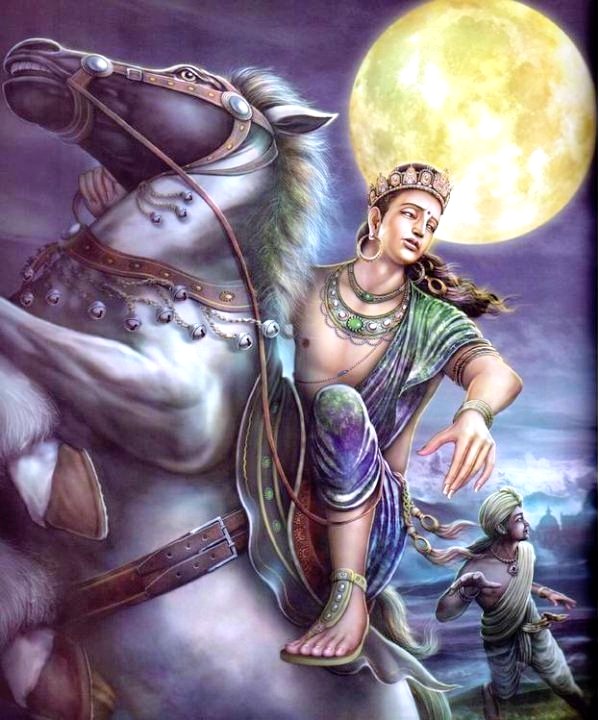 Siddhartha left Kapilavastu that night and on the banks of the Anoma River cut his hair and took on the life of an ascetic. Siddhartha then practiced a way of liberation under the institutes of two hermit teachers – Alara Kalama and Udaka Ramaputta, but, although he achieved higher levels of meditative consciousness, he was still not satisfied with his path. And, so, he moved on.

Siddhartha then went on to Rajagaha, the capital of Magadha, and began his ascetic life by begging for alms in the streets. In Rajagaha, Siddhartha joined five companions headed by Kondanna who was the Brahmin who had stated that Siddhartha would become a great holy man but not a King. They tried to find enlightenment through near total deprivation of worldly goods – including food and practicing self‐mortification. After nearly starving himself to death by restricting his food he began to look like a skeleton. 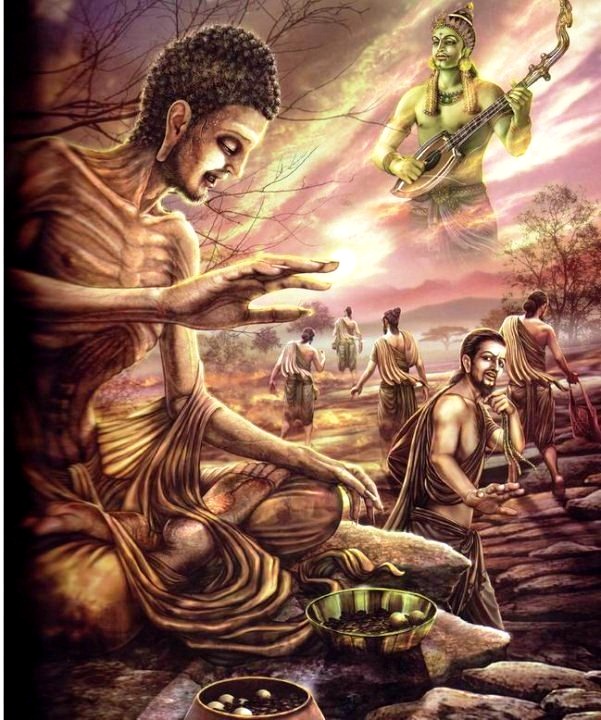 One day he collapsed in a river while bathing and almost drowned, it was at this point that he began to reconsider his path. As he lay there, a boat passed him and he overheard the conversation that two musicians were having aboard – “If you tighten the string too tight it will snap, but if you loosen it, it will not play.” And from this, he realized that he would have to take “Middle Way” to reach enlightenment. True enlightenment could not be reached by going to either extreme.

After many days, Siddhartha started to have some food as it was needed by his body. On that day after having a nice bath in the Neranjara River, his body was as bright as the full moon. Beside him stood a village woman name Sujata who was thinking of fulfilling a vow of having a son and she had a golden tray of rice porridge in her hands. After six years of asceticism and concentrating on mortification, the great ascetic, Siddhartha, had discovered the path of adequacy – a path of moderation away from the extremes of self‐indulgence and self‐mortification. He accepted the rice porridge tray from Sujata who tried to give him food all these six years. After this meal, his mind was free and fresh – nothing is this world was a worry to him. He turned to the golden tray and placed the tray into the tide of Neranjara and made a wish that if he could become enlightened, the tray would float upstream. The tray floated upstream and sunk, right to the bottom of the river where the other three trays from the three previous Buddha’s had also made their wish. Naga, the big serpent, was wakened from the sound of its splash, and said “Goodness, one more Buddha has come for enlightenment”. 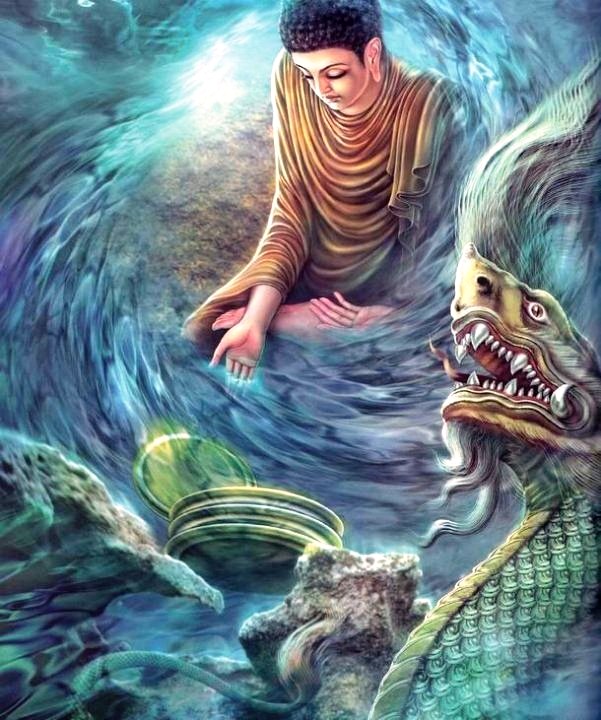 Siddhartha turned to sit under a papal tree, now known as the Bodhi tree, and vowed to sit under the tree until either one of two things happened: his body would be decayed, dried or left only to tendons like a skeleton, or he would arise as an enlightened being having found the Truth. 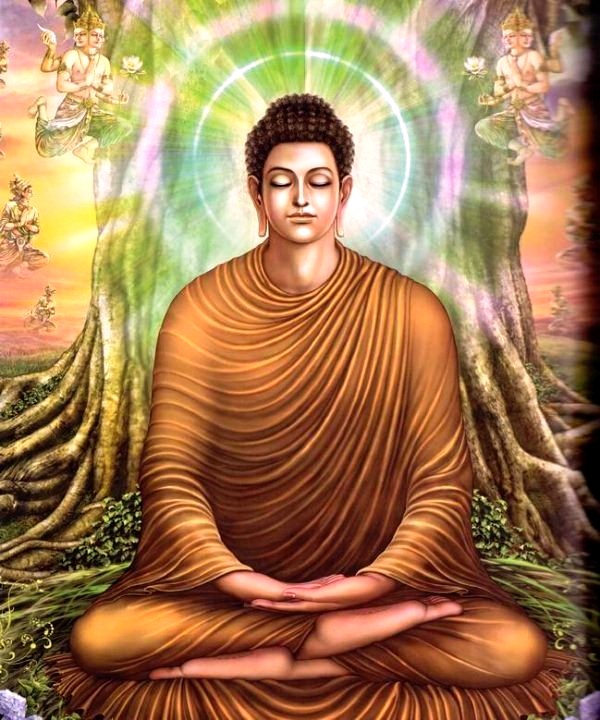 He attained complete enlightenment on the sixth lunar month on the same day as his birth, at the age of 35. From that day on, he was known as “The Buddha”, “The Awakened One”, or “The Enlightened One”. 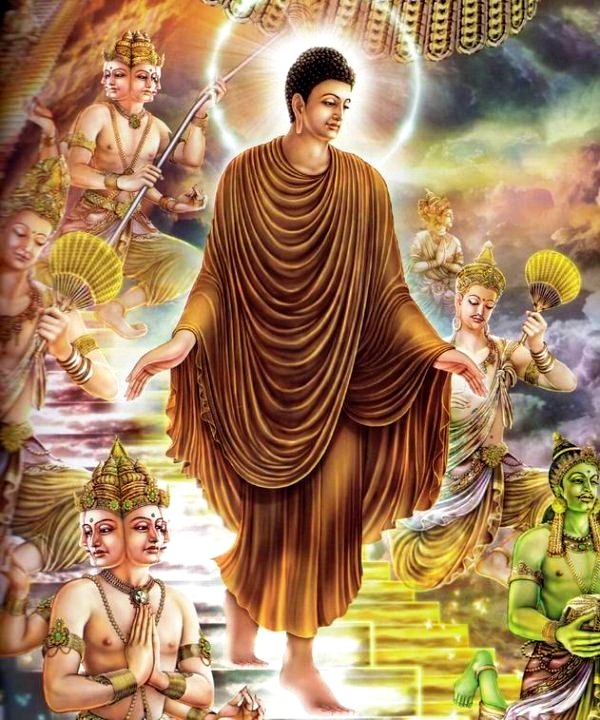 For the remaining years of his life, Lord Buddha is said to have travelled all of the regions in and around India – Bangladesh, Bihar, Pakistan, and Nepal – to teach his doctrine and discipline to extremely diverse groups of people; from nobles to outcast street sweepers, from mass murderers such as Angulimala to cannibal ogres such as Alavaka. He also reached out to teach many adherents of rival philosophies and religions. Lord Buddha founded the community of Buddhist monks and female monks to continue the dissemination of the Dhamma to the millions of people who lived in this area even after his Parinirvana or “Complete Nirvana”. His religion was opened to all races and classes, and it contained no caste structure. 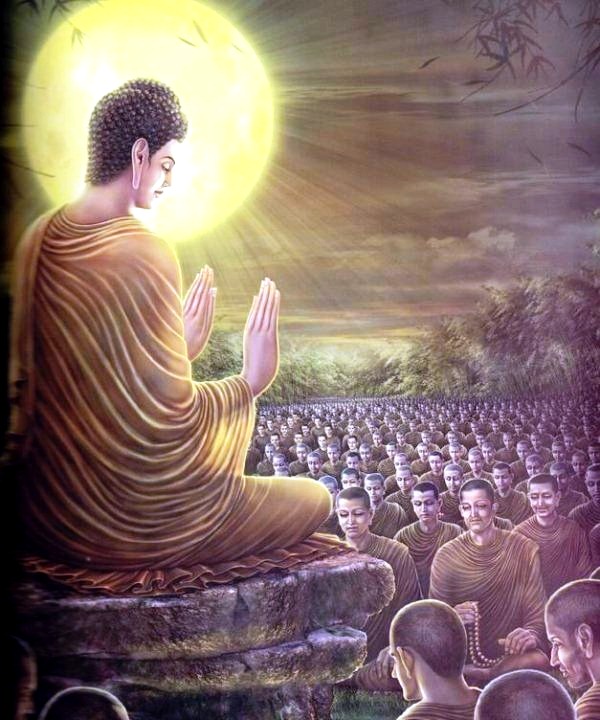 At his death, Lord Buddha told his disciples to follow no leader, but to follow his teachings. 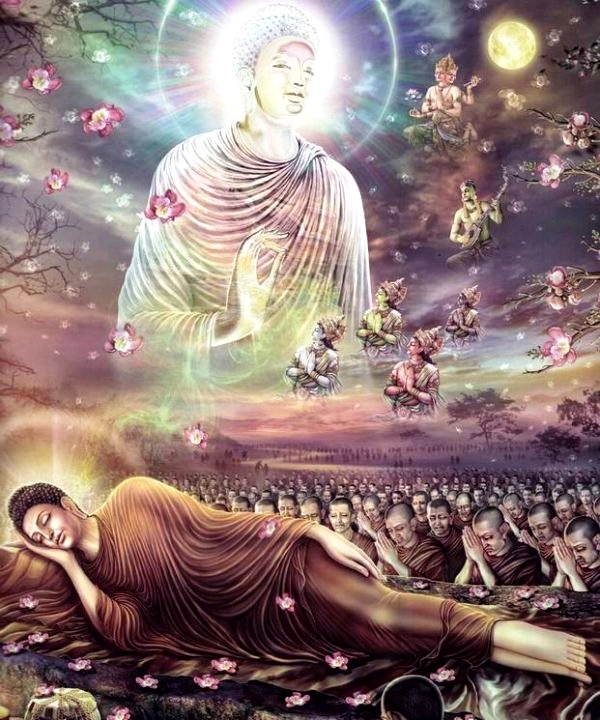 I do not see any harm in the whole world.
Hence, I do sleep
With compassion for all living beings”.