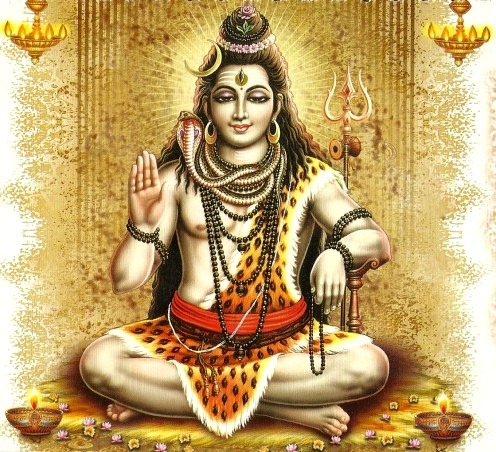 The basic element of manifest and the un-manifest, Power Eternal started the creation in manifested Lord Brahma form. First, water came into existence. By the will of power eternal, Lord Shiva, a divinity got vested in the water and was called “Narayana” (Water borne). Then an egg appeared in the water and out of it came Lord Brahma who split the egg in two halves horizontally. The upper half became celestial world and the lower half the base. The space in between was turned into sky and fourteen domains by Lord Brahma.

He created earth on water. Ten directions came into being in the sky. Then creator made elements of mind, speech, angst, beauty and love. A seven sage group made up of Marichi, Atri, Angira, Pulastya, Pulaha, Ritu and Vashishtha materialised as willed by the mind of creator. The sages were the material and sources for the creation of Purans.

Then, Lord Brahma revealed four Vedas, the book form repositories of wisdom and knowledge of religious exercises. He worshipped Deity Supreme before producing the gods from his chest, humans from his thighs and demons from lower parts. He rested for a long time to assess his creations. But it was a static world with no scope of evolution. To correct this fault he created body and its nature. More creations followed in that format. It was also flawed being non-generative and non-re-creative.

Lord Brahma created a host of his mind born sons who came to be known as Manus. In the same way Manus created more Manus as their own lines of sages, seers and holy ones also came into existence in large numbers. Creator and Manus shaped various other creatures, four legged, two legged, water borne and winged ones. But it still made no sense. Lord Brahma and his Manus were creating like potters make pots and had no generative power of their own. The created world was stagnating. There was no variety, no evolution and no self generation. It frustrated Lord Brahma.

He Prayed to Lord Shiva to guide him into right and lively kind of creation that did not stagnate. Deity Supreme answered the prayer after a long penance of Lord Brahma by manifesting in his Ardhanareeshwara form which was made up of “Half-man + Half-woman” vertically. In this way, he revealed that self- generating and evolutionary creation was possible only through gender based male-female pairing. Lord Brahma got the message.

Then Lord Brahma’s mind projected gender based Manu and Shatroopa pair. Their mating produced sexually reproductive Manus who bred their own lines of males and females. It led to the explosion of the life forms by evolution, sons, daughters, couplings, species and dynastic. King Uttanpada was born who sired the great faithful Dhruva.

Dhruva had two sons, Pushti and Dhanya. They bred Ripu, Ripunjaya, Vipra, Nrikala, Vrisha and Teja to further the blood line in Chaksuta, Varuna, Bena, Prithu (The incarnation of Lord Vishnu), Vijitashwa, Prajapati, Haryavya and his ten thousand sons who became ascetic upon hearing the sermon of Sage Narada who said the mundane life was not worth living being full of woes and miseries. Angered Daksha (Prajapati) put a curse on Narada to be foot loose and not to stay at one place for long. Then, Daksha sired thirteen girls who were married to Sages, Kashyapa, Angira, Krishnashwa and Chandra. As sexual wave spread, Daksha sired more girls said to be 28 in total. The earlier married ones also got new wives besides the girls getting new husband. They all produced a number of deity figures like Vishwa, Sadhya, Marutwana, eight Vasus, twelve Bhanus, Mahurtaja, Ghosa, Naga, Prithvi etc. Then arrived Sankalp, Ava, Dhurva, Soma, Dhara, Anila, Pratyusha and Prabhasha. Sankalpa was their mother.

Prabha produced Vishwakarma Prajapati. He was a craftsman who crafted various masterpieces for the gods like aerial craft, homes, ornaments, embellishments etc. He became deity of craftsmen and skilled workers. Sarupa produced Rudras and they all multiplied into millions of Rudras but eleven are main Rudras namely, Raivata, Aja, Bheema, Bhava, Ugra, Bhama, Vrisha, Kapi, Ankpada, Ahirbungna, Bahurupa and Mahana. They are masters of the world.

In Chakshusha’s blood line Vena was born who was an evil character. He harassed all in many ways. So much so that even sages fled to the forests. At last the seers and sages worked up the death of Vena by invoking a killer mantra. When his mother wept bitterly, the sages of Saraswata line churned the dead Vena’s right hand and out of it Prithu was born. Prithu became the first sole king of the earth. He turned earth into a cow and made it yield the milk of herbal plants, food grain crops, fruit bearing trees, vegetable plants etc. He had four sons. One of them sired ten enunciate sons called Prachatas. They made penance to propitiate Lord Shiva for thousands of years. Lord booned them power to save earth from over vegetation. Prachetas returned to normal life and married Anubhuti. the daughter of Chandra.

Aditi, Diti, Sursa, Arishta, Ila, Dhanu, Surabhi, Vinita, Tabra, Krodha, Voshi, Kadru etc. were the wives of Sage Kashyapa. Aditi gave birth to twelve deities of Tushita order. She was the mother of Lord Vishnu (manifested) and Indra also. Diti produced giants (demonic) and Dhanu bore demons. Vinita produced asura, garuda and other species of birds and animals. Sursa became mother of reptiles. That is why she is known as Nagmata also. Her sons include even the divine serpents like Adishesha, Vasuki and Takshaka. Krodha produced offspring with fangs and claws. Surabhi gave birth to rabbits, hare and buffaloes. Ila was the mother of trees, plants, creepers and other greens. One of them produced females only who became the celestial beauties known as apsaras. Kadruva gave birth to pythons, dragons and boas. Arishta gave birth to men-o-snake.

The offspring’s of Khasha made up the orders of Yakshas and Rakshasas. Tabra produced eight daughters in Keki, Syeni Bhasi, Sujrevi, Shuki, Gridharika, Ashani and valooki besides sons. Further on Keki bore crows, Syeni bore hawks and kites and Bhasi bore ducks and other game birds. Gridharika produced eagles and vultures. Ashmi begot camels, horses and all kinds of asses.

Thus the wives of Kashyapa filled up the world with greens, plants, forests, birds, animals, reptiles, insects and other living creatures. The world was came to be known as Kashyapi.