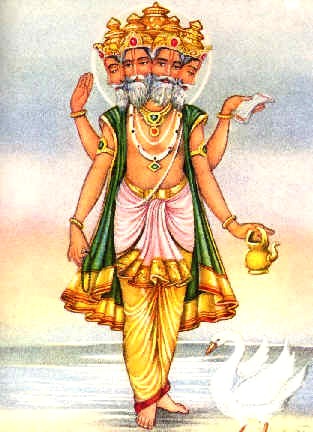 Once while travelling around the universe Lord Brahma reached the abode of Lord Vishnu. He saw Lord Vishnu resting on Shesh-Nag and being attended by Garuda and other attendants.

Lord Vishnu did not get up to receive Lord Brahma. This act of Lord Vishnu got him angry. Very soon, verbal dual erupted between them to determine who is superior. It became so severe that a battle was fought between them, which continued for very long time.

All the deities arrived from heaven to watch the battle. They became very worried when they saw no sign of battle coming to an end. They decided to go to Lord Shiva, to seek his help. 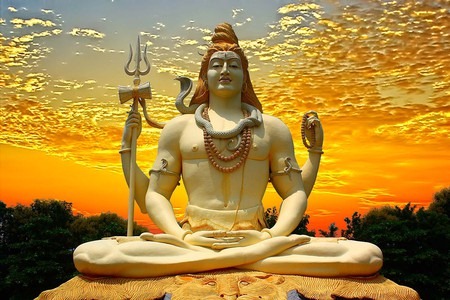 Even though in meditation Lord Shiva knew everything, but still feigning ignorance, he asked about the well beings of the world. The deities told him about the battle, fought between Lord Brahma and Lord Vishnu. Lord Shiva then sent his one hundred Ganas to pacify both of them, but still the war still did not stop.

Then Lord Shiva himself went there. When Lord Shiva reached there, he saw that Lord Brahma and Lord Vishnu were about to use their deadly weapons- Brahma Astra and Narayanastra respectively. Fearing the destruction, which these deadly weapons would cause, Lord Shiva manifested himself in the form of ‘Analstamba’ (pillar of fire) between them. Lord Brahma and Lord Vishnu were very surprised to see the pillar of fire, which was so enormous in size that it reached the sky and penetrated down the Earth.

Lord Shiva became very angry with Lord Brahma, but was pleased with Lord Vishnu and accorded him the same status as that of his own. He proceeded to punish Lord Brahma for his falsehood

After according same status to Lord Vishnu as that of his own, Lord Shiva opened his third eye and from it manifested ‘Bhairav’.

Lord Shiva ordered Bhairav to kill Lord Brahma. Bhairav severed the fifth head of Lord Brahma with his sword. Lord Brahma became very terrified, he was trembling in fear. Lord Vishnu felt pity on his condition and requested Lord Shiva to forgive him. Lord Shiva then stopped Bhairav, but told Lord Brahma –“You spoke untruth with a desire to become worship able. It is my curse that, you will not be worshipped by anybody. You will posses only four heads.” Lord Brahma begged for forgiveness. Lord Shiva feeling pity on him gave him a boon of being the presiding deity of all the yagya (Yajna). Similarly the Ketaki flower was also prohibited from being used during worship. But when Ketaki flower tendered his apology Lord Shiva gave blessing that it would be fortunate to be offered to Lord Vishnu during the worship.