End of Mahabharata and Start of Kali Yuga

“Sri Krishna said: _ You have a right to perform your prescribed duty, but you are not entitled to the fruits of action. Never consider yourself the cause of the results of your activities, and never be attached to not doing your duty.”_ 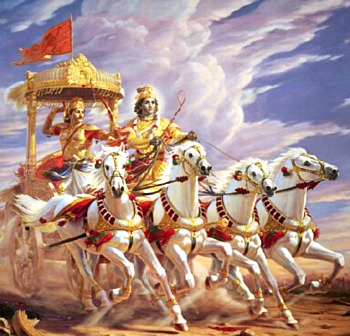 Mahabharata was created and spoken by Vyaas jee, whereas scribed by Ganesh jee. A glimpse of Mahabharata was shown in the Treta Yuga with a twenty three days long battle between two of the greatest warriors of that time, that is, Parshuram and Bhishma.

The actual story of Mahabharata started in the Dvapara Yuga also called as the Third age of man. During the early days of the life of Draupadi, Vyaas jee once visited her kingdom as a sadhu (sage). With her Dhai Ma (nurse-mother). She visited the sadhu excited to know what her future holds. She knelt in front of the sage, touching her head awkwardly to the ground. With a smile glinted through the sage’s beard he said to darupadi –

“You will marry the five greatest heroes of your time. You will be queen of queens, envied even by goddesses. You will be a servant maid. You will be the mistress of the most magical places and then lose it.

But you will be remembered for causing the greatest war of your time. A terrible war of Kurukshetra that will end the Third age of Man.

You will bring about the deaths of evil kings – and your children’s, and your brother’s. A million women will become widows because of you. But yes, indeed you will leave a mark on history.”

As the story of this epic unfolds, soon after the prediction by Vyaas ji, a swayamwar was arranged for Draupadi. But before the wedding there was a test of skill in which one had to pierce the eyes of a fish made of metal, revolving high on the ceiling wall.

The Pandava’s and the Kaurava’s also came to the swayamwar to prove there skills. It was Arjuna (Pandava Prince) who pierced the eye of the fish and married Draupadi.

After marrying Draupadi, Pandava’s went to the place where they lived. Before they were to enter there house, Bheem thought of playing a trick on there mother, he said –“Ma, come see what we’ve brought home today.”

But without looking, Kunti (Pandava’s mother) replied – “Son, I can’t come right now or the food will burn. But as always, whatever you brought should be shared equally amongst all my sons.”

All through her(Kunti) life – even in the hardest of times – everything she said was made sure to be done. She asked her sons to honour her words and all five of them must marry Draupadi. And there forth she became the wife of five husbands also known by the name “Panchaali”.

Later after some time The Pandava’s got a land named khandav from dhritarashtra for themselves to build there kingdom. Maya who built palaces for gods and asura’s built the most magnificent palace for them which they named “The palace of Illusions”.

Pandava’s invited all the kings from Bharata to visit there palace. When the kaurava’s prince Duryodhan visited them, dressed up all perfectly in a white silk outfit, stepped into an illusionary bridge, floundering about in the pool. Drapudai and her attendants burst into a pearl of laughter. One of the attendants said “It seems the blind kings’s son is also blind.”

This insult of Duryodhan led to a game of dice against Yudhisthir, in which he lost everything from his palace to himself and his brother’s and even his wife Draupadi.

After he lost Draupadi, she was dragged trough the palace to the game room by her hair and was take insulted by them. Before leaving the game room she said – “I will not comb my hair untill the day i bathe in kaurava blood”

After the final game Pandava’s and Draupadi were banished to forests for twelve years. During the course of twelve years they lived in forests and as servants in other kings kingdoms

Once those twelve years were completed, Pandava’s raged for battle against the Kaurva’s. The epic battle of Mahabharata was fought in the land of Kurukshetra also to be called as “The war of Kurukshetra”

Shri Krishna was the charioteer of Arjuna, and it was before the war of Kurukshetra, Shri Krishna explained Arjuna his duties as a warrior and prince in the form of “Srimad Bhagavad Gita”.

After the long fought battle of the Kurukshetra, the Pandava’s defeated the Kaurava’s. There was a pire of bodies, women jumping into fire with there husband’s body, million women became widow and bodies were beyond recognizable. But this was not the end of Third age of Man.

Kaurva’s mother (Gandhari) blamed Shri Krishna for the distruction of his sons and ending the kaurva generation. She cursed him – “Because of what you have done, your own clan will destroy itself in the span of one day. On that day, your women will weep just as the women of Hastinapur are weeping now.”

After the span of few years a messenger (Yadu clan) from Dwarka (kingdom of Shri Krishna) came to Hastinapur informing that – Overnight, Dwarka had turned into a city of mourning, peopled – like Hastinapur after the war – with children and widows. Balarama (Shri Krishna’s elder brother) was dead and no one knew where Krishna was, but it was unlikely that he was alive.

After the death of his elder brother, Balarama, Shri Krishna gave up his body using Yoga. He retired into the forest and started meditating under a tree. The hunter Jara, mistook Krishna’s partly visible left foot for that of a deer, and shot an arrow wounding and killing him mortally. Krishna’s soul then ascended to heaven, while his mortal body was cremated by Arjuna. After Krishna’s death it is known that the Kali Yuga has started.

After the death of Shri krishna, Pandava’s decided that it is time for all of them also to die. Before going on there journey towards Heaven through the pathway from Himalaya’s they gave over the kingship of Hastinapur to Parikshit (Grandson of Arjuna and son of Abhimanyu).

Later, Parikshit was cursed by Shringi, the son of Rishi Shamik that – “Since King Parikshit, out of arrogance of his powers, has put a dead snake on my father’s neck, on the seventh day from now, Serpent king Takshak will bite King Parikshit to death. The king will pay for his sins by this untimely death.”

The death of Parikshit, was what Kali was waiting for. He had no fear now & slowly, but surely engulfed the whole world with his negative influence. The age of Kali Yuga had begun…..