So Yesterday, I was finally confident enough to uninstall VMWare from my laptop.

Thanks to the richness of virtualization technologies which are present in Linux (2.6.22) now.

I’ve always liked to explore different operating systems (not distributions really) to see what interesting features they implement differently. BSDs being one, Solaris being the other. But sometimes it really was difficult for me to try them out.

I also own a Dell XPS M1210 laptop with a pretty good configuration.

But wasn’t really maxing out the power of this machine. Thanks to virtualiazation technologies in Linux - Qemu, KVM, UML, It has been pretty good now enjoying the benefits of the machine without really messing the base OS on which I rely for all of my work.

Now coming back to the point of VMWare. VMWare WS is a good software. It has a very usable and nice GUI interface.

So what really kept me away from using Linux Virtualization implementation extensively for long was really the GUI. I mean I have been a Linux console user for 8 years and am very comfortable with it, but today I rather prefer using a GUI to do most of my tasks. Maybe blame KDE for that - It’s so elegant that it spoilt my console habits.

So what really helped me replace VMWare from my box is a good GUI wrapper for Qemu, Qemulator

This app really helped me move away from VMWare and enjoy the native virtulization implementation of Linux.

In my exploration for a GUI wrapper for Qemu, I finally had considered 3 apps.

Unfortunately, I wasn’t able to try out OLPC Qemu Admin , which looks to be a product of RedHat, because I couldn’t find a downloable link on their site. Probably it is supposed to be shipped only with Fedora.

Among Qemulator and QtEmu I finally made up my mind with Qemulator even though QtEmu is a good contendor. But it lacks some basic features which Qemulator has covered properly. Probably it is just a matter of time by when those features will be implemented/fixed.

One of the good features of Qemulator that I liked (which isn’t available in QtEmu) is the ability to add your custom virtualization app (KVM in my case) on a image-by-image basis.

Here are some screenshots which could explain some of the points that I’ve tried to explain: 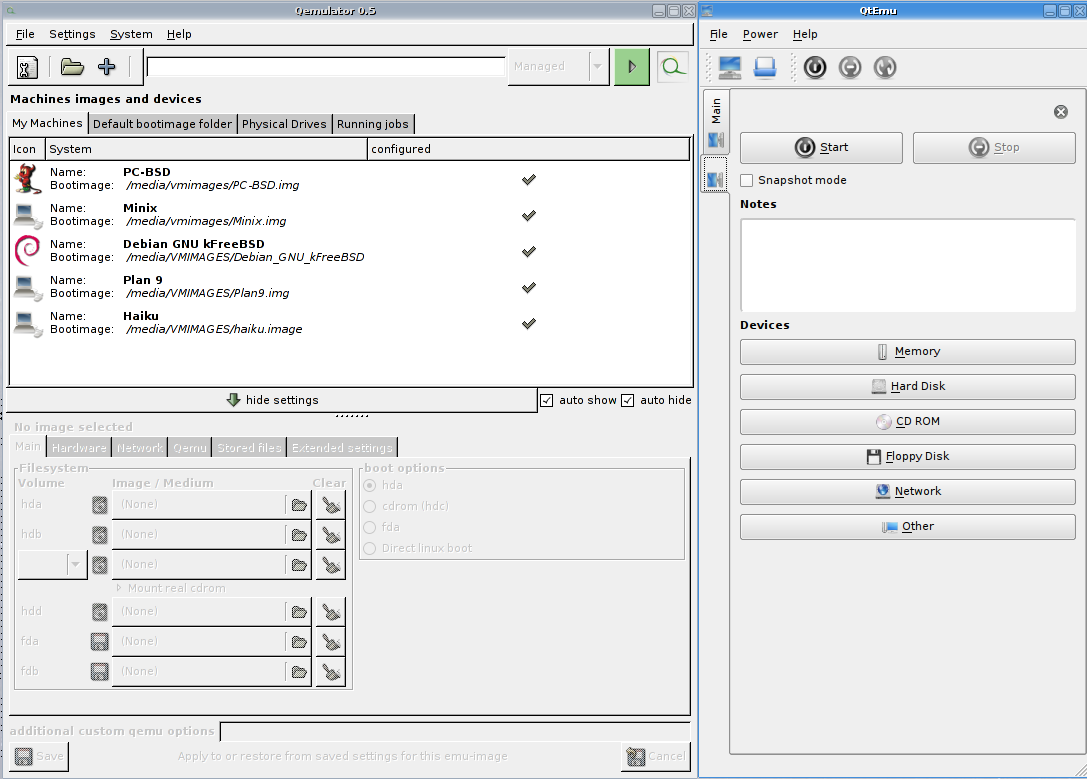 This is the main window interface for both the apps, Qemulator and QtEmu. 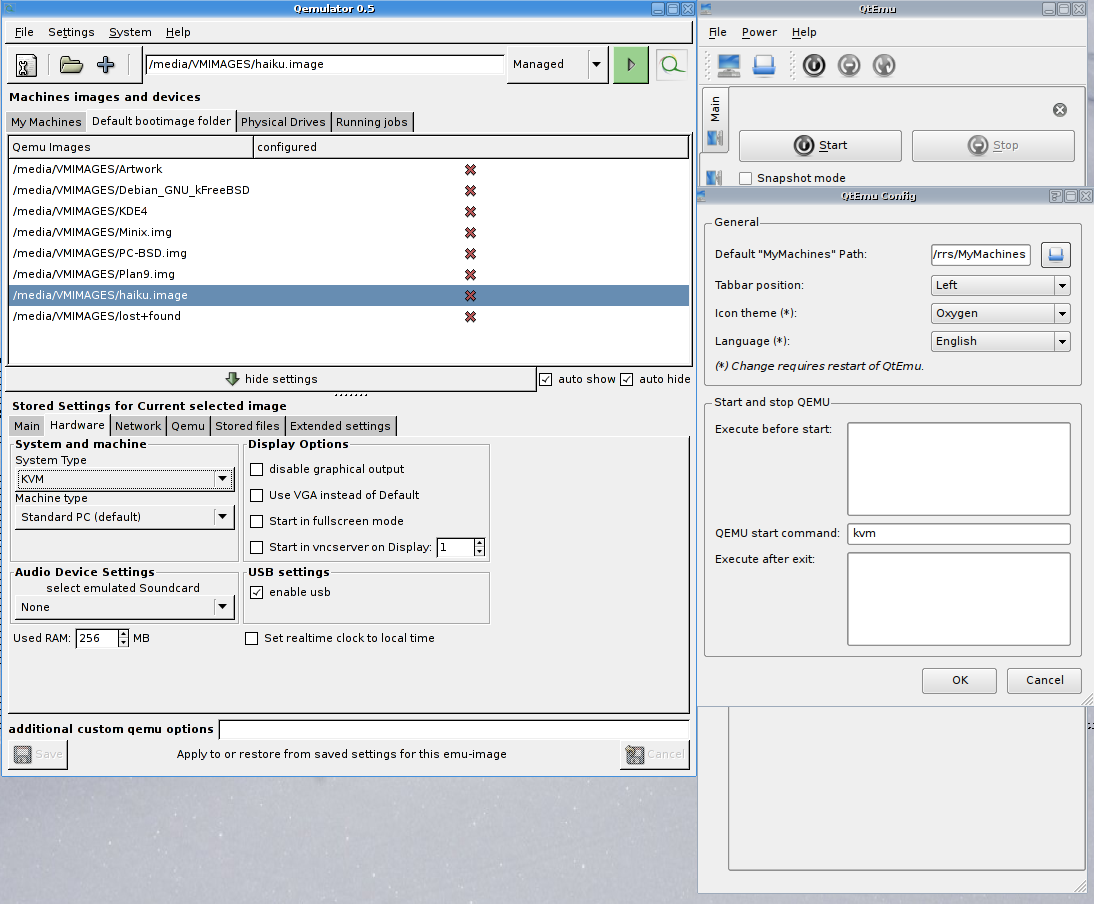 Here if you notice, you can assign a different emulator type for each image in Qemulator. You can also add additional emulator types, like KVM. This is currently one big limitation in QtEmu which I think should be very minor problem to solve.

Another greate feature of Qemulator is Screenshot Capture. You can capture screenshots of your VM as you want. Really wonderful. There’s also Wave capture which I haven’t tried yet. 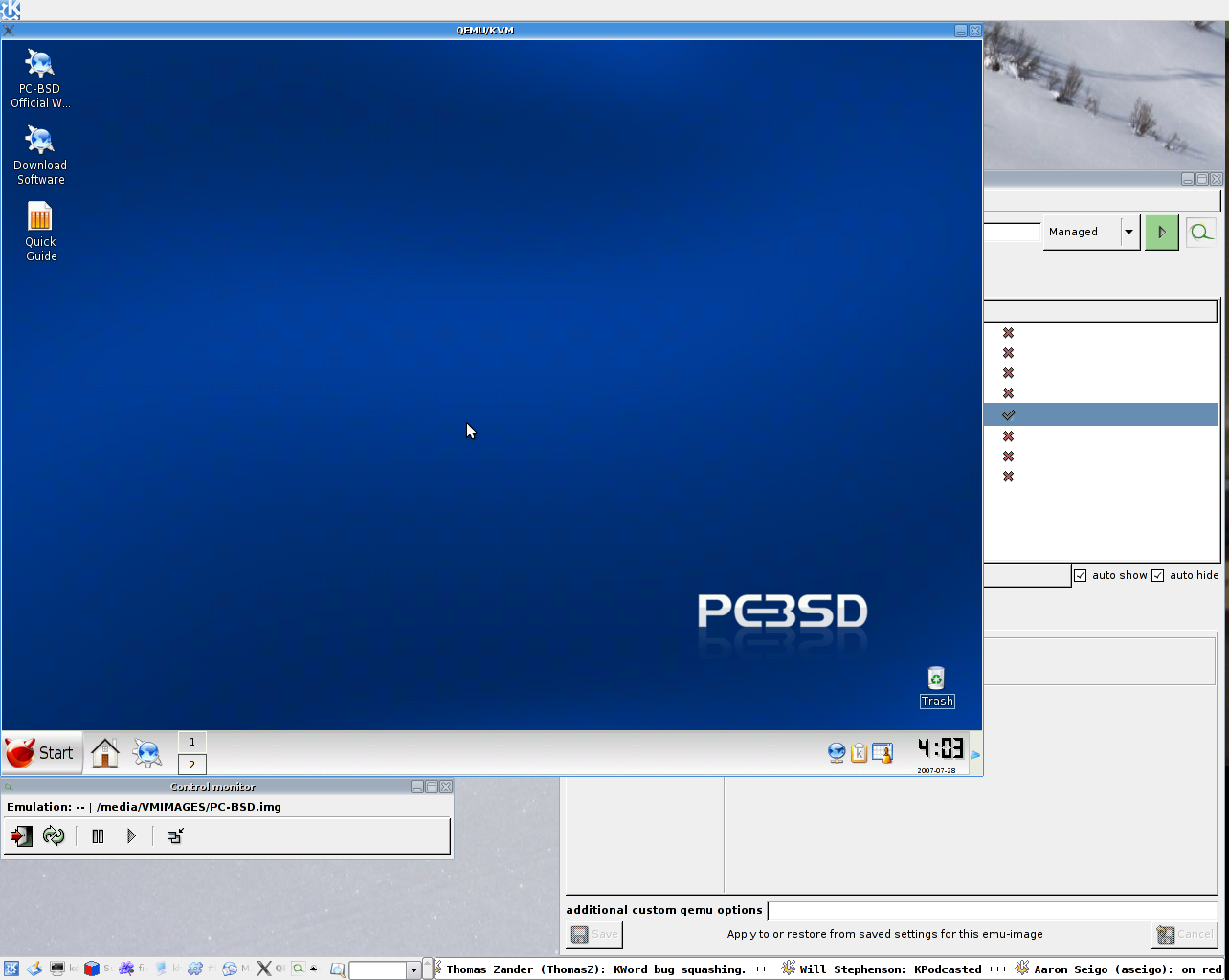 The virtualization technologies in Linux along with proper GUI apps have become a real good solution to use. I’m now eagerly looking forward to 2.6.23 and ahead where I’d be able to explore more option with lguest and later Paravirtualization from within KVM.

On another note, there’s also another virtualization beast in Linux which works prefect. UML, or User Mode Linux, if that sounds better is another great technology if you’re only exploring different Linux versions. If you are a distro fanatic and like to run multiple Linux distributions, UML would be a very good option for your requirements. And the good part about UML is that it runs as a normal user process which when gone bad can be killed very easily. There’s also an additional patch maintained by BlaisorBlade, SKAS (Separate Kernel Address Space) which dramatically improves the performance of UML.For years, it has been maintained externally and I doubt if it is ever going to be merged mainline. But it would have been a lot better if SKAS was available as a Kernel Module. That’d avoid a requirement to recompile the whole kernel for a general user.